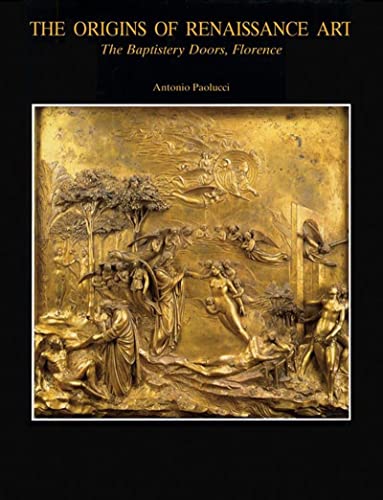 Take an amazing armchair tour of The Baptistery of San Giovanni in Florence, Italy. The Baptistery is one of the oldest buildings in the city, constructed between 1059 and 1128 in the Florentine Romanesque style. It influenced the development of architecture, and formed the basis from which Filippo Brunelleschi, and the others created Renaissance architecture. This is a lush two-volume set bound in silk cloth. Volume one is a full color photographic atlas of the entire historic structure. Volume two is detailed history of the art and architecture in English and Italian. The Baptistery is renowned for its three sets of artistically important bronze doors with relief sculptures. The south doors were done by Andrea Pisano and the north and east doors by Lorenzo Ghiberti. The east doors were dubbed by Michelangelo the Gates of Paradise. The poet Dante and many members of the Medici family, were baptized in this baptistery.

This lavish volume - containing comprehensive texts and 294 full color illustrations - serves as an essential and much-needed introduction to the carved bronze doors of Florence's Baptistery, a landmark of Renaissance art. When Florence took cultural command of Italy early in the fifteenth century, inaugurating the Renaissance and establishing itself as the intellectual and artistic capital of southern Europe, one of the key signposts in the new movement was the competition for a design for the east doors of the Baptistery in 1401-02. Andrea Pisano had designed the south doors of the same structure almost three generations earlier. Now, the greatest sculptors of the age - among them Lorenzo Ghiberti and Filippo Brunelleschi - submitted their versions of the sacrifice of Isaac. Ghiberti's more elegant and cohesive version was ultimately selected; his completed doors would, in the end, establish him as one of the most sought-after artists of his day.

Antonio Paolucci is the Italian Minister of Culture.

1. The Origins of Renaissance Art: The Baptistery Doors, Florence

Book Description George Braziller, NY, 1996. Hardcover. Condition: New. Dust Jacket Condition: New. NEW BOOK and DJ, both in GIFT-quality MINT condition, and with new Mylar protection. // Hardcover edition, 171 pages, illustrated with explicit details of Ghiberti's magnificent doors. By virtue of his work on these monumental doors, Ghiberti's reputation was established and he became one of the foremost artists of his day. // Exact copies of these doors enhance Grace Cathedral in San Francisco. // You want this book. Quatro. Seller Inventory # 004007