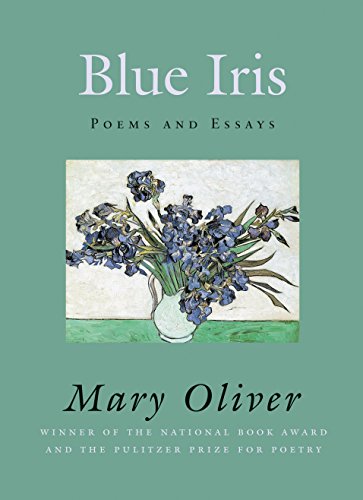 A rich collection of ten poems, two essays, and two dozen of Mary Oliver's classic works on flowers, trees, and plants of all sorts, elegantly illustrated, Blue Iris is the essential companion to Owls and Other Fantasies, one of the best-selling volumes of poetry of 2003 and a Book Sense 76 selection.

Blue Iris fortuitously offers an extended sequence and new contexts for a writer whose precise eye and instinct for surprising images have made her one of the best practitioners of the lyrical revelation . . . Oliver continues to earn applause and admiration for continuing to provide redemptive meditation and supple praises for nature in a time when so much is under threat.--R.T. Smith, Shenandoah

"Salvation, in Mary Oliver's poems, consists of the living of a natural life, the dying of a natural death, and the ability to look clearly in both directions while keeping the two processes in balance."--Jay Rogoff, Southern Review "Mary Oliver's poems are natural growths out of a loam of perception and feeling, and instinctive skill with language makes them seem effortless. Reading them is a sensual delight."--May Swenson "The gift of Oliver's poetry is that she communicates the beauty she finds in the world and makes it unforgettable."
-Miami Herald "These 32 poems and four essays offer rich meditations on flowers in nature, showing how plant life reflects the life of the human heart . . . A companion to Oliver's recent Owls and Other Fantasies: Poems and Essays, this work presents poetry in free verse, which Oliver has perfected in all of its musicality and rhythm."--Library Journal About the Author:

A private person by nature, Mary Oliver (1935-2019) gave very few interviews over the years. Instead, she preferred to let her work speak for itself. And speak it has, for the past five decades, to countless readers. The New York Times recently acknowledged Mary Oliver as "far and away, this country's best-selling poet." Born in a small town in Ohio, Oliver published her first book of poetry in 1963 at the age of 28; No Voyage and Other Poems, originally printed in the UK by Dent Press, was reissued in the United States in 1965 by Houghton Mifflin. Oliver has since published twenty books of poetry and six books of prose. As a young woman, Oliver studied at Ohio State University and Vassar College, but took no degree. She lived for several years at the home of Edna St. Vincent Millay in upper New York state, companion to the poet's sister Norma Millay. It was there, in the late '50s, that she met photographer Molly Malone Cook. For more than forty years, Cook and Oliver made their home together, largely in Provincetown, Massachusetts, where they lived until Cook's death in 2005. Over the course of her long and illustrious career, Oliver has received numerous awards. Her fourth book, American Primitive, won the Pulitzer Prize for Poetry in 1984. She has also received the Shelley Memorial Award; a Guggenheim Fellowship; an American Academy and Institute of Arts and Letters Achievement Award; the Christopher Award and the L.L. Winship/PEN New England Award for House of Light; the National Book Award for New and Selected Poems; a Lannan Foundation Literary Award; and the New England Booksellers Association Award for Literary Excellence. Oliver's essays have appeared in Best American Essays 1996, 1998, 2001; the Anchor Essay Annual 1998, as well as Orion, Onearth and other periodicals. Oliver was editor of Best American Essays 2009. Oliver's books on the craft of poetry, A Poetry Handbook and Rules for the Dance, are used widely in writing programs. She is an acclaimed reader and has read in practically every state as well as other countries. She has led workshops at various colleges and universities, and held residencies at Case Western Reserve University, Bucknell University, University of Cincinnati, and Sweet Briar College. From 1995, for five years, she held the Catharine Osgood Foster Chair for Distinguished Teaching at Bennington College. She has been awarded Honorary Doctorates from The Art Institute of Boston (1998), Dartmouth College (2007) and Tufts University (2008).