Items related to Bewilderments: Reflections on the Book of Numbers

Avivah Gottlieb Zornberg Bewilderments: Reflections on the Book of Numbers

Bewilderments: Reflections on the Book of Numbers 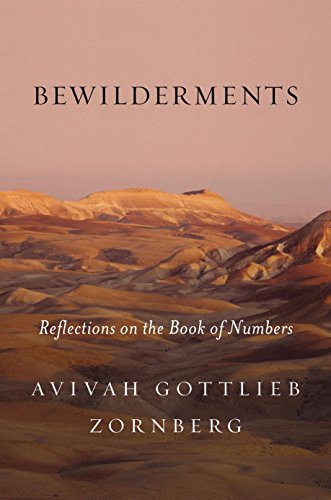 From one of the most acclaimed biblical commentators at work today, the third book in her award-winning series of commentaries on the Hebrew Bible.

The Book of Numbers is the narrative of a great failure. What should have been for the Israelites a brief journey from Mount Sinai to the Holy Land becomes a forty-year death march. Both before and after the devastating report of the spies, the narrative centers on the people's desire to return to Egypt, to undo the miraculous work of the Exodus. At its heart are speeches of complaint and lament, expressing a profound existential skepticism. But by contrast, in the narrative of the Book of Numbers that is found in mystical and Hassidic sources, the generation of the wilderness emerges as one of extraordinary spiritual experience, receivers of the Torah to the fullest extent, fed on miracles and nurtured directly by God: a generation of ecstatic faith. Its true subject is the greatness of a people impassioned by God, human partners in an unprecedented conversation with the Deity. Drawing on kabbalistic sources, the Hassidic commentators on the Book of Numbers depict a people who transcend prudential considerations in order to follow God into the wilderness, and whose spiritual yearning comes to full expression there.

This view of the wilderness history invites us to a different kind of listening to the many cries of distrust, lament, resentment that issue from the Israelites throughout the Book of Numbers. Is there a way to integrate this narrative of dark murmurings, of obsessive fantasies of return to Egypt, with the celebration of a love-intoxicated wilderness discourse? The question touches not only on the language the Israelites speak but also on the very nature of human utterance. Who are these people? Who are we who listen to them? What effect does the cumulative trauma of slavery, the miracles of Exodus, the revelation at Sinai have on a nation that is beginning to speak? In Bewilderments, Avivah Gottlieb Zornberg posits fascinating answers to these questions through the magnificent literary, scholarly, and psychological analysis of the text that is her trademark.

"Celebrated for her brilliant teaching and her dazzling skill in interpreting Bible narratives, Zornberg offers masterful midrashic readings of biblical texts. Through psychological insight, Jewish philosophy, and comparative literary analysis, she plumbs the depths of rabbinic interpretation. Those who have had the pleasure of reading her previous works will be delighted to know that Bewilderments has just been published. New readers will also savor this commentary." --Lilith

"Zornberg's background allows her to draw from English and European literature and from the most recent literary and psychoanalytic sources, as well as from her deep knowledge of Jewish texts, particularly classical rabbinic midrash and modern Hasidic writers." --The Jerusalem Post Magazine "Zornberg is among the leading, and perhaps the most original, biblical commentators at work today. Biblical scholarship usually stays hidden within the academy or appeals to a limited audience, but Zornberg's penetrating takes on the Torah, interweaving broad literary and analytic sources, are increasingly finding their way to a wider public." --The Jewish Week "Zornberg has an immense body of knowledge at her command. She has the unique ability to draw on everything from postmodern literary criticism, art history, and psychoanalysis, even as she remains mindful of classical rabbinic commentary and more recent Hasidic writings." --Tablet "Biblical verses blossom into a bouquet of provocative and enlightening insights . . . well managed by Zornberg." --Booklist "This is not a simple retelling of the book of Numbers but, rather, a commentary of a high order based on artful Hebrew prose and poetry. Zornberg displays her own superior hermeneutic skills as she calls on the teachings of vaunted rabbinic authorities, Midrashic tradition, and the homilies of Hasidic masters. [She also] incorporates psychiatry, philosophy, and world literature into the study of Holy Writ. A powerful, important textual deconstruction of the mystical fourth book of the Old Testament." --Kirkus Reviews "Zornberg's grasp of the rabbinic interpretations of the text (as well as of Jewish philosophy generally) is masterful, and the meat of her work is in relating these interpretations to the spiritual and psychological questions, or bewilderments, evoked by the book of Numbers." --Publishers Weekly About the Author:

4. Bewilderments: Reflections on the Book of Numbers

5. Bewilderments: Reflections on the Book of Numbers

6. Bewilderments: Reflections on the Book of Numbers

7. Bewilderments: Reflections on the Book of Numbers

8. Bewilderments: Reflections on the Book of Numbers