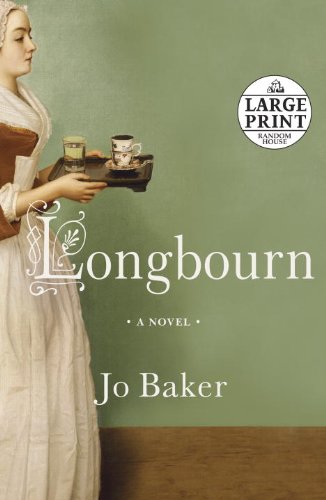 · Pride and Prejudice was only half the story ·

If Elizabeth Bennet had the washing of her own petticoats, Sarah often thought, she’d most likely be a sight more careful with them.

In this irresistibly imagined belowstairs answer to Pride and Prejudice, the servants take center stage. Sarah, the orphaned housemaid, spends her days scrubbing the laundry, polishing the floors, and emptying the chamber pots for the Bennet household. But there is just as much romance, heartbreak, and intrigue downstairs at Longbourn as there is upstairs. When a mysterious new footman arrives, the orderly realm of the servants’ hall threatens to be completely, perhaps irrevocably, upended.

Jo Baker dares to take us beyond the drawing rooms of Jane Austen’s classic—into the often overlooked domain of the stern housekeeper and the starry-eyed kitchen maid, into the gritty daily particulars faced by the lower classes in Regency England during the Napoleonic Wars—and, in doing so, creates a vivid, fascinating, fully realized world that is wholly her own.

"Jo Baker gives us the story from the servants' perspectives and pulls off the seemingly impossible: a completely fresh take on Jane Austen. Utterly engrossing." Guardian "Captivating and delicious. A brilliantly imagined and lovingly told story about the wide world beyond the margins and outside the parlours of Pride and Prejudice" Maggie Shipstead, author of SEATING ARRANGEMENTS "GREAT READS: Pride and Prejudice reimagined as a mysterious manservant stirs up passions in the Bennet household both upstairs and down" woman and Home "Superb... The lightest of touches by a highly accomplished young writer" Mail on Sunday "This clever glimpse of Austen's universe clouded by washday steam is so compelling it leaves you wanting to read the next chapter in the lives below stairs" Daily Express "A must-read for fans of Jane Austen, this literary tribute also stands on its own as a captivating love story" Publisher's Weekly "A fantastic feat of imagination, unflinching in its portrayal of war and the limitations of life for a servant" Psychologies Magazine "Splendid...Baker's imaginative leaps are stunningly well done both historically (the scenes set at the siege of Corunna are terrific) and emotionally...What a great film it will make (the rights sold early); the well-loved novel shaken up and given the grit which Jane Austen could never include." Evening Standard "Longbourn is a really special book, and not only because its author writes like an angel" Daily Mail "Densely plotted and achingly romantic. This exquisitely reimagined Pride and Prejudice will appeal to Austen devotees and to anyone who finds the goings-on below stairs to be at least as compelling as the ones above " Library Journal "Her depiction of the brutal realities of army life - a world away from the jolly officers of Austen's novel - is particularly powerful. Indeed, a burning sense of injustice is palpable throughout the book ... Sarah's story is so compelling that I kept forgetting that one of literature's most famous love stories was happening upstairs ... moving, gripping, unsentimental" Irish Times

Jane Austen's Pride and Prejudice below stairs - the story of romance, intrigue, and drama among the servants of the Bennet household. A Richard & Judy Book Club pick.