Items related to Rahel Levin Varnhagen: The Life and Work of a German... 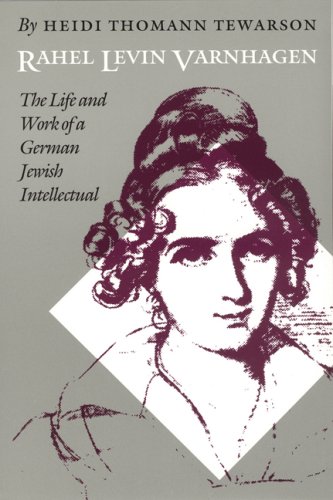 The life and work of a german jewish intellectual. With 15 black and white illustrations . 8vo pp. 262 Brossura (wrappers) Perfetto (Mint)

" ... a long overdue scholarly assessment of Rachel to place alongside Hanna Arendt's Rahel Varnhagen: Life of a Jewess."--Journal of European Studies

Rahel Levin Varnhagen (1771-1833) occupied a unique place in German intellectual history. She is known for the salon she initiated in Berlin, which became a center for intellectuals and artists of various social classes - especially for writers of the Romantic and the Young Germany schools. Based on research at the rediscovered "Varnhagen Collection", Heidi Thomann Tewarson provides a new and comprehensive portrait of this remarkable woman. No longer primarily the sparkling salonniere, Varhagen is recognized as the author of a unique epistolary oeuvre. Tewarson gives a rich account of Varnhagen's intellectual community, made up of such figures as Friedrich and Dorothea Schlegel, Clemens Brentano, Goethe, Hegel, Leopold Ranke, Heine, and the assimilated Jewish community in Berlin. Tewarson also discusses Varnhagen's writings on women, philosophy, literature, Jews, and a host of other topics. In particular, she highlights Varnhagen's insights into - and vehement protests against - discrimination against women and Jews.

These writings led to Varnhagen's reputation as a leading intellectual of her era - a champion of literary figures and movements, of human rights, and of Enlightenment values. Heidi Thomann Tewarson is a professor of German at Oberlin College. Author of two books and numerous articles, she publishes on eighteenth-, nineteenth-, and twentieth-century German literature.

1. Rahel Levin Varnhagen: The Life and Work of a German Jewish Intellectual (Texts and Contexts)

5. Rahel Levin Varnhagen: The Life and Work of a German Jewish Intellectual (Texts and Contexts)