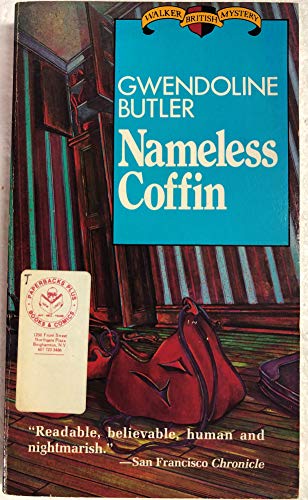 First time in paperback!
Nobody took much notice when the handbag slashing began in London. A few women found small nicks in their handbags, others huge gashes. John Coffin had a feeling that the cases were going to lead to something far more unpleasant. A similar case in Scotland—of coats, this time—comes to trial in Murreinhead, and Giles Almond, a mild-mannered officer of the Court, is viciously attacked by a knife-wielding assailant. Then the body of a missing Murreinhead woman is discovered in a rotting tenement in London, and the chase is on... Coffin's investigation moves between the two locales and suspense builds as yet another murder victim is discovered...Where is the killer? And what is the connection between London and Murreinhead?

Gwendoline Butler is one of the world’s top one hundred crime writers according to The Times, and is one of the most universally praised of English mystery authors, under both her own name and that of Jennie Melville.

‘Gwendoline Butler is excellent on the bizarre fantasies of other people's lives and on modern paranoia overlaying old secrets; and her plots have the rare ability to shock’ ANDREW TAYLOR, THE INDEPENDENT

‘[Butler's] inventiveness never seems to flag; and the singular atmosphere of her books, compounded of jauntiness and menace, remains undiminished’ PATRICIA CRAIG, TLS

A crime novel featuring John Coffin, who is investigating cases of handbag slashing in London, when a similar case appears in Murreinhead in Scotland. Then the body of a missing Murreinhead woman is discovered in a tenement in London. What is the connection? From the author of COFFIN IN OXFORD.