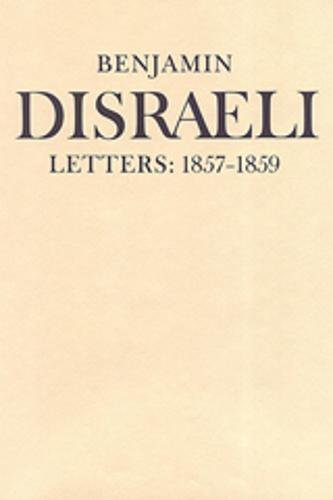 Benjamin Disraeli was perhaps the most colourful Prime Minister in British history. This seventh volume of the highly acclaimed Benjamin Disraeli Letters edition shows also that he was a dedicated, resourceful, and farsighted statesman. It contains 670 letters written between 1857 and 1859. They address friends, family, political colleagues, and, not least, Queen Victoria and Prince Albert. During this period, Disraeli shepherded a fragile Conservative government through the Indian Mutiny, the Second Opium War with China, the Orsini bomb plot, and the Franco-Austrian-Piedmontese War, only to fail at home over parliamentary reform. Day-by-day politics and behind-the-scenes strategy dominate, while lighter-hearted letters to friends and family reveal the private Disraeli's charm and wit. With an appendix of 115 newly found letters dating from 1825, as well as information on 219 unfound letters, full annotations to each letter, an exhaustive name-and-subject index and a comprehensive introduction, this volume will be a vital resource for new understanding of this enigmatic statesman.

Benjamin Disraeli (1804-1881) was one of the most important figures in nineteenth-century Europe, spending three decades in British government and twice serving as prime minister, as well as being a well-known literary figure. A convert to Anglicanism, he was Britain's first and thus far only Prime Minister of Jewish heritage. Mary S. Millar is a co-editor with the Disraeli Project and an independent scholar in Kingston, Ontario. Ann P. Robson is a professor emeritus in the Department of History at the University of Toronto. M.G. Wiebe is general editor emeritus of the Disraeli Project and was a professor of English at Queen's University.

Book Description University of Toronto Press, Scholarly Publishing Division, 2004. Condition: Good. A+ Customer service! Satisfaction Guaranteed! Book is in Used-Good condition. Pages and cover are clean and intact. Used items may not include supplementary materials such as CDs or access codes. May show signs of minor shelf wear and contain limited notes and highlighting. Seller Inventory # 0802087280-2-4