Items related to The Poem of Empedocles: A Text and Translation with... 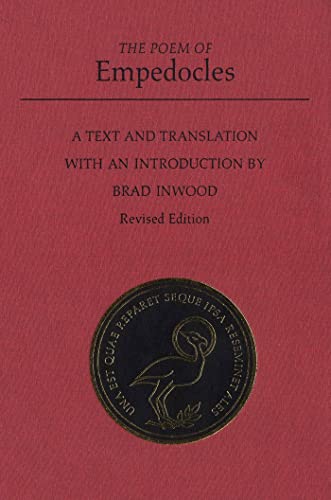 This revised edition of The Poem of Empedocles (1992) integrates substantial new material from a recently discovered papyrus and published by A. Martin and O. Primavesi. The papyrus contains evidence of over seventy lines or part lines of poetry, of which more than fifty are both new and usable. The integration of this material into the previously known fragments has significant impact on our understanding of Empedocles, one of the most influential philosophers and poets of antiquity.This volume provides the reader with the fullest and most accessible set of evidence for the doctrines and poetic achievement of this Presocratic philosopher. The Greek text of the fragments (with English facing page translation) has been revised to include the new material; textual notes have also been enhanced. The revised introduction orients the reader to the study of Empedocles and assesses the significance of the new material. The new papyrus fragments shed some light on the controversial question of the number of poems and provide new insight into the relationship between human beings and the material components we are composed of and into the reasons for our incarnation. Most important, the new fragments yield further confirmation that eschatological and cosmological themes were inextricably interconnected in Empedocles' philosophical poetry.

Brad Inwood is Professor of Classics, University of Toronto.

1. The Poem of Empedocles: A text and translation with a commentary (Phoenix Supplementary Volumes)

2. The Poem of Empedocles: A text and translation with a commentary (Phoenix Supplementary Volumes)

3. The Poem of Empedocles: A text and translation with a commentary (Phoenix Supplementary Volumes)