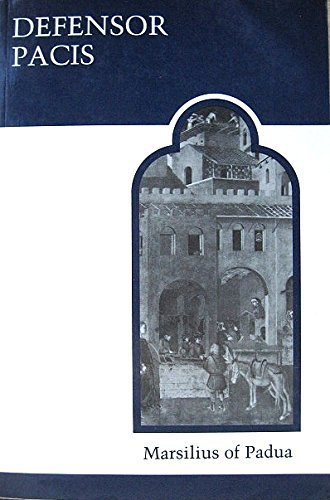 Marsilius of Padua is one of the few truly revolutionary figures in the history of political philosophy. The first to propound the separation of Church and State, he is considered the precursor to subsequent political thinkers, from Machiavelli to Marx. The Marsilian revolution consisted not only in a radical change in the theory of the relations between religion and politics that culminated in the Protestant Reformation and other central developments of the modern era, but, even more importantly, it had an effect on the whole conception of human beings - their nature, acts, values, and sociopolitical relations. As Cary J. Nederman writes in the foreword to this new edition, "Marsilius continues to speak to many of the salient issues of modern political life, expressing his doctrines in a language that has resonance and relevance. Whether in addressing the role of citizenship as a buffer between individual and community, or in explicating the foundations of religious toleration, the "Defensor Pacis" (and Marsilius' other writings) affords a distinctive theoretical perspective that rivals that of any of the great thinkers of the Western political tradition."

Alan Gewirth is Edward Carson Waller Distinguished Service Professor of Philosophy at the University of Chicago. Cary J. Nederman is professor of political science at Texas A & M University.