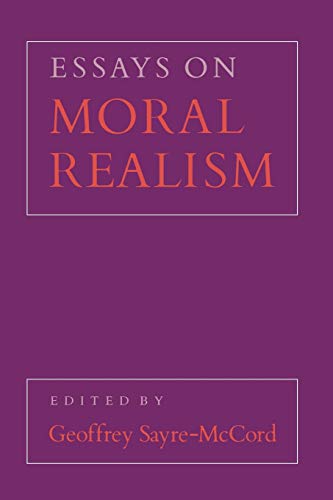 For the greater part of this century, most philosophers and social scientists have eschewed moral realism. According to their view, moral facts cannot be accommodated by a suitably scientific picture of the world. However, recent developments in moral theory, the philosophy of science, and the philosophy of language have undermined the standard arguments against moral realism and have led many to maintain that there are powerful reasons for believing in moral facts. As a result, moral realism is enjoying renewed vitality, while the arguments against it have of necessity become more sophisticated and penetrating. This collection of influential essays illustrates the range, depth, and importance of moral realism, the fundamental issues it raises, and the problems it faces. Geoffrey Sayre-McCord has chosen accessible, rigorous, and thought-provoking papers, all of which are rich enough to encourage and reward several readings and careful study. In addition, the volume strikes a balance between wide-ranging papers that advance a barrage of arguments, and more focused papers that develop a few arguments in great detail. What emerges is a comprehensive overview of the moral realism debate that exhibits the scope, as well as the intricacies, of the arguments marshaled on all sides. It will be welcomed by scholars and students of philosophy, the social sciences, and political science. CONTRIBUTORS: A. J. Ayer, Simon Blackburn, Richard Boyd, Gilbert Harman, Jonathan Lear,' J. L. Mackie, John McDowell, Mark Platts, Geoffrey Sayre-McCord, Nicholas Sturgeon, David Wiggins, Bernard Williams.

"This volume is both important and timely. The debate about moral realism is central to moral philosophy, and it has been the focus of renewed interest in recent years, with a significant body of interesting new work on the topic beginning to emerge. Yet there is no comparable anthology in existence, and most of the new work is scattered throughout the literature, some of it in fairly inaccessible places. Thus this anthology will find an interested and receptive audience. "--Samuel Scheffler, Department of Philosophy, University of California, Berkeley