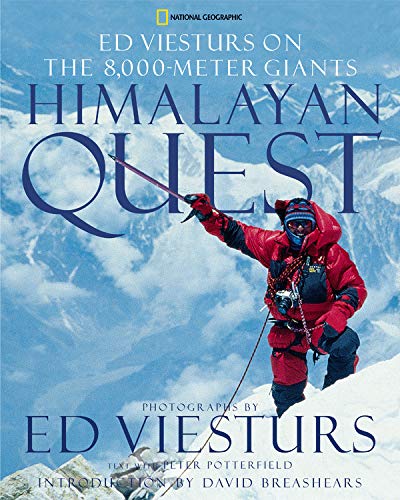 This book of mountain images provides an unforgettable glimpse into the remarkable world of Ed Viesturs, America's best-known high altitude climber, and the breathtaking landscape in which he works. As told with Peter Potterfield, award-winning mountaineering journalist, Viesturs narrates his quest to climb the 14 highest mountains of the world, those peaks above 8,000 meters in height. Viesturs and Potterfield will take readers along on some of the successes and failures of Viesturs's quest. To date, of the fourteen 8,000 meter peaks, Viesturs has been to the summit of twelve, including five separate ascents of Mount Everest. His odyssey of adventure has taken him from the Karakoram of Pakistan and the summit of K2, to the Nepal Himalaya, where he has climbed two of the world's highest mountains in the span of mere days. The riveting tales of Viesturs's mountaineering adventures are illustrated by Viesturs's own stunning photographs, between 85 and 100 images, a photographic collection that is the primary focus of the book, a collection that will show like never before the deadly beauty and haunting menace of the Himalaya. Captions will explain each photograph and its setting, describing both the heartbreaking tragedy Viesturs has faced and the ineffable joy he has experienced while striving at the limits of human endurance. Himalayan Quest offers spectacular insight into the rarefied world of the Himalayan climber.

"Viesturs is no ordinary climber; he's a legend in mountaineering."--Los Angeles Times

\Ed Viesturs is America’s leading high altitude mountaineer. He is one of only five people in the world to climb the highest peak on each of the seven continents.

Peter Potterfield is the author of four books on the subject of mountains and wilderness, including the critically acclaimed In the Zone, and The High Himalaya.