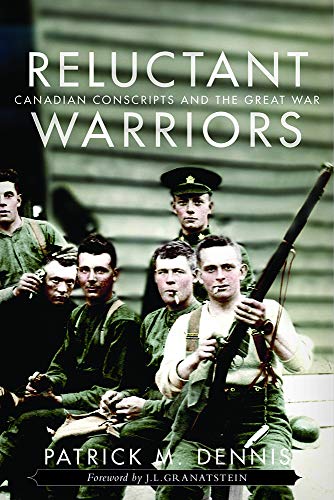 Reluctant Warriors will be of interest to scholars, students, and readers interested in the First World War in general, and conscription in particular.

Patrick M. Dennis is a retired Canadian Air Force colonel who served abroad for over twenty-two years, including tours as Canada's deputy military representative to the NATO Military Committee in Brussels, Belgium, and as the Canadian defence attache to Israel. He is a graduate of the United States Armed Forces Staff College and the NATO Defence College and holds a master's degree in communication from the University of Northern Colorado. In 1986, he was invested by Governor-General Jeanne Sauve as an Officer in the Order of Military Merit. After leaving the military, he lectured on global political-military affairs at Wilfrid Laurier University and was a part-time instructor with the Canadian Forces College, Toronto, specializing in command and management and the law of armed conflict. Currently, he is an adjunct associate with the Laurier Centre for Military Strategic and Disarmament Studies.