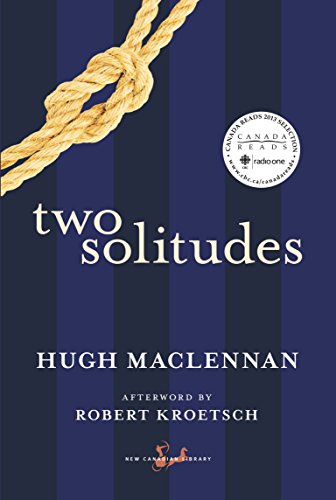 "First time in the New Canadian Library
"
Northwest of Montreal, through a valley always in sight of the low mountains of the Laurentian Shield, the Ottawa River flows out of Protestant Ontario into Catholic Quebec. It comes down broad and ale-coloured and joins the Saint Lawrence, the two streams embrace the pan of Montreal Island, the Ottawa merges and loses itself, and the main-stream moves northeastward a thousand miles to sea.
With these words Hugh MacLennan begins his powerful saga of Athanase Tallard, the son of an aristo-cratic French-Canadian tradition, of Kathleen, his beautiful Irish wife, and of their son Paul, who struggles to establish a balance in himself and in the country he calls home.
First published in 1945, and set mostly in the time of the First World War, "Two Solitudes" is a classic novel of individuals working out the latest stage in their embroiled history."

"Canada should stage a coming-of-age party this year. We have produced two novels of the full stature of manhood [including] Hugh MacLennan's Two Solitudes ... Here is the substance of Canada, her countryside, her cities, her conflicting cultures, and, above all, her people."

"Two Solitudes is the most impressive book that comes within my range this year ... The general theme of the meeting of the two cultures is excellent."

A major 20th century Canadian author, Hugh MacLennan was born in Glace Bay, Nova Scotia, in 1907. His seven novels and many essays and travel books present a chronicle of Canada that often mediates between the old world of its European cultural heritage and the new world of American vitality and materialism. Among his many honours, he won five Governor General s Awards. Hugh MacLennan died in Montreal in 1990."