Items related to Guitar For Dummies 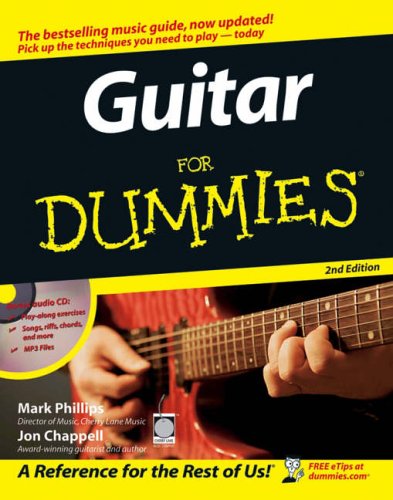 The 500,000-copy bestseller, now revised with 25 percent new material and an all-new interactive CD Guitar sales are on the rise, jumping from 1. 7 million sold in 2000 to nearly 2 million in 2003. Now revised and updated, this is the perfect introductory guide for all those novice acoustic and electric guitar players.

"Offers great guidance on everything from buying your first guitar to legends who can inspire you."

Mark Phillips is a guitarist, arranger, and editor with more than 30 years in the music publishing field. He earned his bachelor’s degree in music theory from Case Western Reserve University, where he received the Carolyn Neff Award for scholastic excellence, and his master’s degree in music theory from Northwestern University, where he was elected to Pi Kappa Lambda, the most prestigious U.S. honor society for college and university music students. While working toward a doctorate in music theory at Northwestern, Phillips taught classes in theory, ear–training, sight–singing, counterpoint, and guitar. During the 1970s and early ’80s, Phillips was Director of Popular Music at Warner Bros. Publications, where he edited and arranged the songbooks of such artists as Neil Young, James Taylor, the Eagles, and Led Zeppelin. Since the mid–’80s he has served as Director of Music and Director of Publications at Cherry Lane Music, where he has edited or arranged the songbooks of such artists as John Denver, Van Halen, Guns N’ Roses, and Metallica, and has served as Music Editor of the magazines Guitar and Guitar One. Phillips is the author of several books on musical subjects, including Metallica Riff by Riff, Sight–Sing Any Melody Instantly, and Sight–Read Any Rhythm Instantly. In his non–musical life, Phillips is the author/publisher of a series of “fun” high school English textbooks, including The Wizard of Oz Vocabulary Builder, The Pinocchio Intermediate Vocabulary Builder, and Tarzan and Jane’s Guide to Grammar. For the reference value of his numerous publications, Phillips is profiled in Who’s Who in America. Jon Chappell is a multistyle guitarist, transcriber, and arranger. He attended Carnegie–Mellon University, where he studied with Carlos Barbosa–Lima, and he then went on to earn his master’s degree in composition from DePaul University, where he also taught theory and ear training. He was formerly Editor–in–Chief of Guitar magazine, Technical Editor of Guitar Shop Magazine, and Musicologist for Guitarra, a classical magazine. He has played and recorded with Pat Benatar, Judy Collins, Graham Nash, and Gunther Schuller, and he has contributed numerous musical pieces to film and TV. Some of these include Northern Exposure, Walker, Texas Ranger, Guiding Light, and the feature film Bleeding Hearts directed by actor–dancer Gregory Hines. In 1990, he became Associate Music Director of Cherry Lane Music where he has transcribed, edited, and arranged the music of Joe Satriani, Steve Vai, Steve Morse, Mike Stern, and Eddie Van Halen, among others. He has more than a dozen method books to his name, and is the author of Rock Guitar For Dummies and the textbook The Recording Guitarist — A Guide for Home and Studio, published by Hal Leonard.

Book Description Condition: New. This is a brand new book! Fast Shipping - Safe and Secure Mailer - Our goal is to deliver a better item than what you are hoping for! If not we will make it right!. Seller Inventory # 1XGHL80002VD_ns