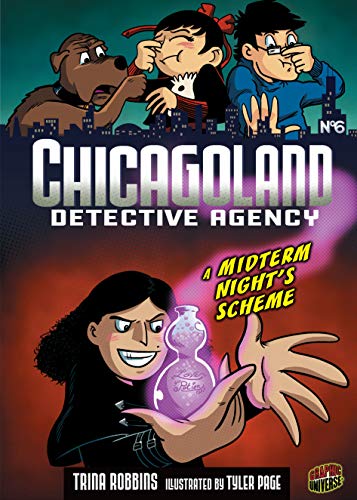 Help! Just before the science fair, a set of magic potions disappear from Luna's locker! The Chicagoland Detective Agency takes up the young witch's case. If Raf, Megan, and Raf's talking dog Bradley can handle space aliens, mummies, and ghosts, this case is child's play!

But when a potion goes awry and a hooded stalker and a wannabe master criminal intervene, the case takes a wild turn into a full-blown catastrophe. Will love-smitten supersleuth Megan and jet-pack inventor Raf be able to straighten out this mess in time? Or will Bradley's nose save the day once more?

"In their sixth case, the Chicagoland Detective Agency investigates the disappearance of magic potions from young witch Luna's locker just before the science fair and a mysterious stalker who keeps following Luna. But their investigation is complicated when a love potion in Megan's tea causes her to become smitten with talking-dog Barkley. Page's black-and-white line drawings match the cartoony tone of Robbins' comic, most notably the whirlwind climax, which takes place at the science fair, where myriad magic potions cause manic chaos. The happy conclusion finds everyone back in his or her own body and features a matter-of-fact, chaste same-sex romance." --Booklist Online

"Fans of the Chicagoland Detective Agency series have a problem. With each book, the plot gets more and more difficult to explain.

The science-fair projects at James A. Garfield Middle School include a jet pack and a robot that can bag groceries. The students have built every invention that was ever promised by the World's Fair or The Jetsons. The graphic novel feels like a mashup of Hanna-Barbera cartoons and science-fiction comics and everything Robbins watched or read when she was growing up. It has a talking dog and a love potion and snippets of haiku. Some of the plot is borrowed, loosely, from A Midsummer Night's Dream, as the title suggests: 13-1/2-year-old Megan drinks a potion and falls in love with the talking dog. A few readers will find this creepy, but anyone who grew up on Hanna-Barbera cartoons will think it's perfectly normal. The author and the artist must have had a ball throwing new complications into the story, and Page has crammed every possible detail into the pictures of the science fair. The story gets more absurd with every page (by the last chapter, a character has turned into a cat), but the book is still a perfectly credible mystery with a very satisfying solution.

Don't bother trying to explain it to your friends. Just tell them it's hilarious." --Kirkus Reviews

--Journal About the Author:

Writer and feminist herstorian Trina Robbins has been writing books, comics, and graphic novels for over 30 years. Her most recent books are The Brinkley Girls (Fantagraphics) and Forbidden City: the Golden Age of Chinese Nightclubs (Hampton Press). Her newest graphic novel is the three-part YA series Chicagoland Detective Agency for Graphic Universe(TM).

Book Description Library Binding. Condition: Very Good. Page, Tyler (illustrator). Item is in very good condition. If supplemental codes/CDs for textbooks are required please contact us prior to purchasing as they may be missing. Photos are stock pictures and not of the actual item. Seller Inventory # DS-0761381678-2