Items related to South: The Illustrated Story of Shackleton's Last... 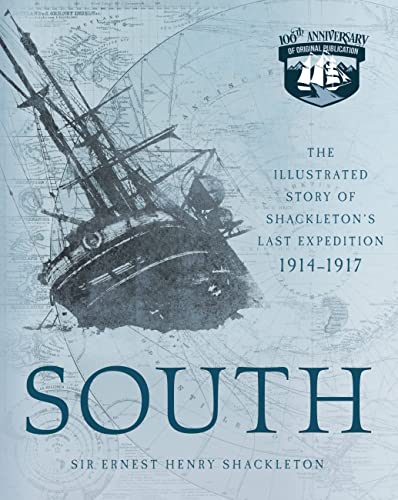 In 1914, the polar explorer Ernest Shackleton announced an ambitious plan to lead the first trek across Antarctica via the South Pole. The expedition would prove fraught with adventure—and peril. South is the remarkable tale of the ill-fated expedition, told in Shackleton's own words—breathtakingly illustrated in this unique edition with photography from the expedition, modern images of the Antarctic, and newly discovered photos from the Ross Sea Party.

This handsome edition, first published in 2016, is presented in paperback to coincide with the 100th anniversary of the original publication and features images by expedition photographer Frank Hurley, modern color photography of the fauna and vistas the men encountered, as well as long-lost photos taken by the expedition’s Ross Sea Party and discovered in 2013.

The expedition’s story begins on the eve of World War I, when the ship Endurance departed England with Shackleton and his team of six men. The plan was to travel 1,800 miles across the icy continent from the Atlantic side, while a second team aboard the Aurora, would reach Antarctica’s Pacific side and lay out supply depots for the advancing team. As the Endurance approached the continent, however, it became hopelessly locked in an ice floe, beginning a series of harrowing travails.

Today considered an adventure survival classic, South is the true story of a thrilling polar expedition. Never before has Shackleton's lively prose been so extensively and stunningly illustrated.

Sir Ernest Henry Shackleton was born in Ireland in 1874 and raised mostly in London. He led three expeditions to the Antarctic. He died of a heart attack in 1922 while setting out on his fourth expedition.

Frank Hurley (1885–1962) was a native Australian who served as a photographer on several Antarctic expeditions with Sir Ernest Henry Shackleton. He also worked as a war photographer with the Australian military forces during both World Wars. He was the official photographer on Shackleton's Imperial Trans-Antarctic Expedition and was known for his pioneering use of the early Paget color photography process.

1. SOUTH: THE ILLUSTRATED STORY OF

2. SOUTH: THE ILLUSTRATED STORY OF

3. SOUTH: THE ILLUSTRATED STORY OF

Book Description Paperback. Condition: New. Paperback. In 1914, the polar explorer Ernest Shackleton announced an ambitious plan to lead the first trek across Antarctica via the South Pole. The expedition would prove fraught with adventure - a.Shipping may be from multiple locations in the US or from the UK, depending on stock availability. 384 pages. 1.296. Seller Inventory # 9780760364826