Items related to When the Swallows Come Again

When the Swallows Come Again 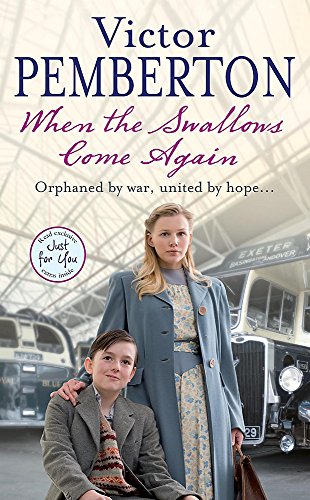 The new wartime saga from the hugely popular Victor Pemberton is 'History with a heart on its sleeve' Northern Echo" Mary Trimble doesn't have a penny to her name, and life has been hard since her parents were killed in an air raid two years ago. It's up to her to look after her two young sisters, little brother and elderly granddad. Mary works as an usherette at the Marlborough cinema in the Holloway Road, but her dream is to escape the horrors of London and take her family on a long charabanc trip to some faraway place the famous Blue Coach from Victoria Coach Station to Devon. But little does she know her dream will come at a tragic price...

Victor Pemberton is a successful radio playwright and TV producer, and has worked with some of the great names of entertainment, including Benny Hill and Dodie Smith, had a longstanding correspondence with Stan Laurel and scripted and produced many of the BBC's Dr Who series. He has worked as a producer for Jim Henson, and set up his own production company, whose first TV documentary won an Emmy Award.

2. When the Swallows Come Again