Items related to Baggage: My Childhood 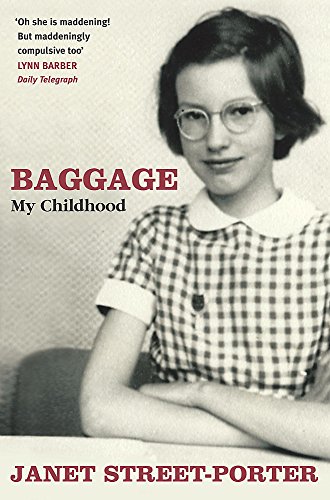 Born in working-class Fulham to parents who for years she refused to believe were really hers, Janet loathed her mother, tried to murder her sister, and had a friend who was given a life sentence for a contract killing. In a household subsumed with repressive 'Welshness' (even the budgerigar spoke Welsh), she found solace in unsuitable friendships and outrageous behaviour.

In this mesmerising account of growing up in post-war London there is poignancy, mystery - and a trademark black humour. BAGGAGE will touch readers at many levels; it is as edgy and fearless as Janet Street-Porter herself.

An entertaining and often moving memoir, Baggage is written with all the fervour of a belligerent (Telegraph)

You read every page entertained, mesmerised and amazed (Independent on Sunday)

Witty and extrovert, ruthlessly ambitious and unforgiving, Street-Porter would, on the evidence of this book, make a horrible enemy but a great friend (Independent on Sunday)