Items related to An Affair For The Baron: (Writing as Anthony Morton)

Creasey, John An Affair For The Baron: (Writing as Anthony Morton)

An Affair For The Baron: (Writing as Anthony Morton) 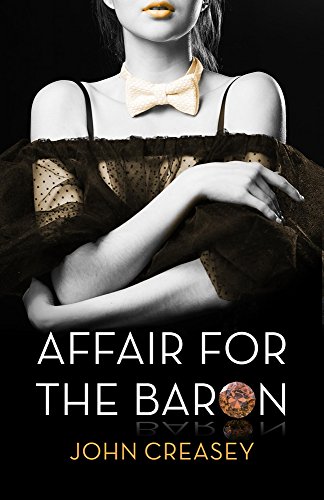 A retired criminal, Mario Ballas, lives in Mexico surrounded by his priceless collection of art treasures. Despite being protected by a ruthless gang of guards an emerald is stolen. It may seem to be outside his normal sphere, but John Mannering (aka 'The Baron') is called upon t investigate and uncovers more than anyone originally imagined.

Born in Surrey, England, into a poor family as seventh of nine children, John Creasey attended a primary school in Fulham, London, followed by The Sloane School. He did not follow his father as a coach maker, but pursued various low-level careers as a clerk, in factories, and sales. His ambition was to write full time and by 1935 he achieved this, some three years after the appearance of his first crime novel Seven Times Seven . From the outset, he was an astonishingly prolific and fast writer, and it was not unusual for him to have a score, or more, novels published in any one year. Because of this, he ended up using twenty eight pseudonyms, both male and female, once explaining that booksellers otherwise complained about him totally dominating the C section in bookstores. They included: Gordon Ashe, M E Cooke, Norman Deane, Robert Caine Frazer, Patrick Gill, Michael Halliday, Charles Hogarth, Brian Hope, Colin Hughes, Kyle Hunt, Abel Mann, Peter Manton, JJ Marric, Richard Martin, Rodney Mattheson, Anthony Morton and Jeremy York. As well as crime, he wrote westerns, fantasy, historical fiction and standalone novels in many other genres. It is for crime, though, that he is best known, particularly the various detective series, including Gideon of Scotland Yard, The Baron, The Toff, and Inspector Roger West, although his other characters and series should not be dismissed as secondary, as the likes of Department Z and Dr. Palfrey have considerable followings amongst readers, as do many of the one off titles, such as the historical novel Masters of Bow Street about the founding of the modern police force. With over five hundred books to his credit and worldwide sales approaching one hundred million, and translations into over twenty-five languages, Creasey grew to be an international sensation. He travelled widely, promoting his books in places as far apart as Russia and Australia, and virtually commuted between the UK and USA, visiting in all some forty seven states. As if this were not enough, he also stood for Parliament several times as a Liberal in the 1940 s and 50 s, and an Independent throughout the 1960 s. In 1966, he founded the All Party Alliance, which promoted the idea of government by a coalition of the best minds from across the political spectrum, and was also involved with the National Savings movement; United Europe; various road safety campaigns, and famine relief. In 1953 Creasey founded the British Crime Writers Association, which to this day celebrates outstanding crime writing. He won the Edgar Award from the Mystery Writers of America for his novel Gideon s Fire and in 1969 was given the ultimate Grand Master Award. There have been many TV and big screen adaptations of his work, including major series centred upon Gideon, The Baron, Roger West and others. His stories are as compelling today as ever, with one of the major factors in his success being the ability to portray characters as living his undoubted talent being to understand and observe accurately human behaviour. John Creasey died at Salisbury, Wiltshire in 1973. 'He leads a field in which Agatha Christie is also a runner.' - Sunday Times."