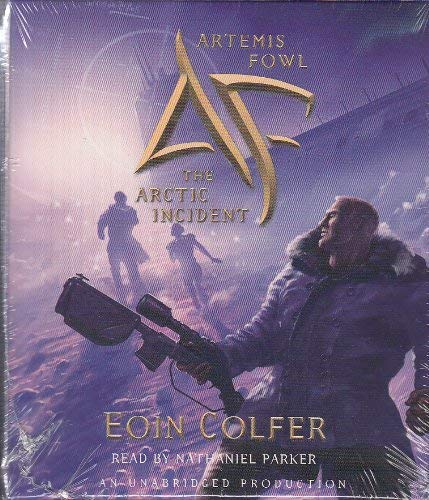 After the massive worldwide success of Artemis Fowl comes this equally stunning sequel, which finds old enemies Holly Short and Artemis Fowl working together for the first time. A bold and daring plan is necessary to fight the threat to the Lower Elements from the goblin B'wa Kell triad - and to rescue Artemis's father.

Eoin Colfer's bestselling anti-hero is well and truly back in Artemis Fowl: The Arctic Incident--the superb sequel to the hyper-hyped, Whitbread Children's Book of the Year-shortlisted Artemis Fowl.

The Arctic Incident sees the slightly older, perhaps slightly more mellow, arch-criminal Artemis recovered from his last adventure, richer now that he has his half-a-hoard of fairy gold, and happier since the Clarice Starling-esque super-fairy Captain Holly Short of the LEPrecon returned his mother's ailing mind to full health.

But there is still much unfinished business: Artemis Fowl Senior disappeared when a daring escapade, designed to free his family from their criminal--not to mention deeply lucrative--past and move the family's assets into legitimate enterprises, went horribly wrong. Held captive by the Mafiya (the Russian organised crime sindicate) for over two years, he has been declared officially dead, but Artemis junior knows in his heart (yes, he does have one) that his beloved father is still alive and determines to find him. Meanwhile Captain Short is temporarily on assignment to Customs and Excise as punishment for letting Fowl separate her and her People from their gold and is finding her stake-out duties a little dull. But it soon becomes obvious that the pair have need of each other's considerable skill base, and before long they are on track for an adventure that will ultimately have far-reaching consequences for both of them.

If you enjoyed the first book, you won't be disappointed by the second. Initially the pace is perhaps a little slower, but once the sparks between Holly and Artemis begin to fly, and the adventure that tests their endurance to their emotional, physical and intellectual limits begins, the pages just keep on turning.

The high-tech hocus pocus and complex James Bond-style storyline will keep even the most reluctant reader enthralled, while the developing tension between Holly and Artemis becomes increasingly intriguing and is more than enough to keep readers coming back for more. Add to the mix a fair dollop of humour, the occasional sprinkling of right-on commentary about the state of the planet, plus the fact there are enough hooks in the story to ensure you will be gagging for Artemis III, this chilling, thrilling adventure is a seriously cool (in more ways than one!) must-read for anyone aged nine or over. --Susan Harrison

Eoin Colfer followed his parents into teaching and soon found himself inventing stories for his pupils. His first novel BENNY AND OMER was a number-one bestseller in Ireland - it, like ARTEMIS FOWL, was written after a day's teaching and after his young son had gone to bed. Eoin is currently taking a break from teaching and concentrating fully on his writing. He lives in Wexford, Ireland.