Items related to The Last Princess: The Devoted Life of Queen Victoria's... 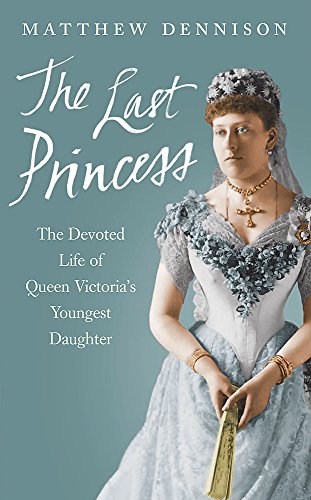 Beatrice was the last child born to Queen Victoria and Prince Albert. Her father died when she was four and as Matthew Dennison relates Victoria came to depend on her youngest daughter absolutely, but she also demanded from her complete submission.

It is an enthralling story, not just of a mother/daughter relationship, but of a Queen and subject relationship. Beatrice succumbed to her mother's obsessive love, so that by the time she was in her late teens she was her constant companion and running her mother's office, which meant that when Victoria died her daughter became literary executor, a role she conducted with teutonic thoroughness. She edited and bowdlerised her mother's Journals that cover 70 years and where possible her voluminous correspondence.

Although Victoria tried to prevent Beatrice even so much as thinking of love, her guard slipped when Beatrice was 29. She met Liko, Prince Henry of Battenberg, and fell in love. Beatrice, however, did not end up simply as a wife and mother. She loved music and composed a military march which remains in the repertoire of British regimental bands, she sang and she painted.

Matthew Dennison draws on extensive new material to restore Princess Beatrice to her rightful place as a key figure in the Victorian dynasty.

In a readable and empathetic biography, Dennison makes light work of his subject's long and lethargic life. (INDEPENDENT)

`An engrossing biography of Queen Victoria¿s youngest daughter that focuses on her relationship with her wilful mother. Beautifully written.¿ (TATLER)

`Dennison emerges as a natural storyteller, succeeding in the difficult task of turning a relatively uneventful, acquiescent life into a hugely satisfying biography. THE LAST PRINCESS is emotionally sympathetic and beautifully written, its detail meticulous¿ a confidant and disarmingly impressive debut.¿ (DAILY TELEGRAPH)

Book Description Orion Publishing Group, Limited, 2008. Condition: Good. Ships from the UK. Former Library book. Shows some signs of wear, and may have some markings on the inside. Seller Inventory # 19292700-20

Book Description Phoenix (an Imprint of The Orion Publishing Group Ltd ), 2008. Paperback. Condition: Very Good. The book has been read, but is in excellent condition. Pages are intact and not marred by notes or highlighting. The spine remains undamaged. Seller Inventory # GOR001325232