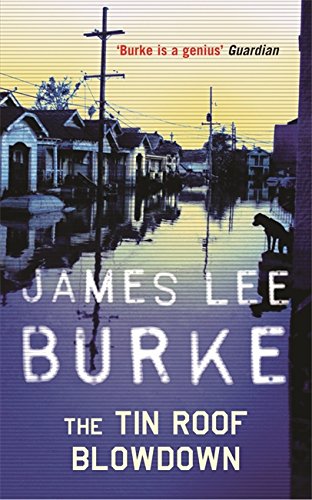 New Orleans is awash with corpses after Hurricane Katrina unleashes its awesome power. In a city patrolled only by looters, all law and order gone, the survivors wait in trees or on rooftops for help that never comes.

In a landscape transformed into a violent wasteland, Dave Robicheaux must investigate the shooting of two looters and find out why some very dangerous people are hunting a third. Is it because they unwittingly ransacked the house of a notorious mob boss? Or did a chance encounter with the father of a raped girl seal their fate? As Robicheaux starts to uncover a ruthless tale of greed, torture and murder, his own family comes under threat from a sinister psychopath, and the devastated city provides the perfect stage for a final confrontation between good and evil.

THE TIN ROOF BLOWDOWN is more than a crime novel; more than a literary novel even. It is a work of profound historical value and importance ... To say I enjoyed this book is an understatement ... there were moments when I wanted to put the book down, it was so painful to continue. But I couldn't. Nor, I dare say, will anyone else (Independent on Sunday)

THE TIN ROOF BLOWDOWN is the novel James Lee Burke was born to write. His imagination has always tended to the apocalyptical - but Hurricane Katrina outdid his worst inventions ... The passages describing the actual flooding are tremendously powerful but Burke also weaves a fully satisfying story into this extreme event (Evening Standard)

This New Orleans looks like Bosch and reads like Ballard ... it's worth emphasising that no 'literary' novelist has performed this task of imaginative witness to disaster yet. And none will do it half so well as Burke. ... he proves more forcefully than ever that he can dive down these mean - or drowned - streets and strike both a tragic, and epic, note (Independent)

In the US, he's often regarded as the crimewriter's crimewriter. But that was before Hurricane Katrina ripped the soul out of Burke's beloved New Orleans and inspired him to write what has to be his most gripping thriller to date ... Burke's descriptions, especially of the aftermath of the hurricane, are more vivid and powerful than any piece of reportage I've yet to come across (The Mirror)

Probably his finest novel ... it's quite an achievement to make the 16th novel in a series a personal best, but it's more than that - it stands comparison with the best of Southern fiction (Observer)

The story, about greed and murder and redemption, contains some of Burke's most brilliantly realised characters ... a compelling and moving narrative, punctuated by his devastating descriptions of the ravaged city (Sunday Telegraph)

You feel guilty for enjoying it so much ... a great piece of art has come out of human trouble ... it is his greatest novel (Boyd Hilton Simon Mayo Book Club)

A beautifully written howl of rage and pain over the disaster - social, political, human - that was Hurricane Katrina ... Burke has crafted a killer mystery and a passionate tribute to to his beloved New Orleans (Time Out)

THE TIN ROOF BLOWDOWN is, inevitably, sadder and angrier than previous Robicheaux novels. We always knew James Lee Burke was a master craftsman of the crime genre. This proves him to be more than that (The Times)

A powerful evocation of Hurricane Katrina and its devastating effects on New Orleans.

Book Description Paperback. Condition: Good. The book has been read but remains in clean condition. All pages are intact and the cover is intact. Some minor wear to the spine. Seller Inventory # GOR001196367

Book Description -. Paperback. Condition: Very Good. The Tin Roof Blowdown This book is in very good condition and will be shipped within 24 hours of ordering. The cover may have some limited signs of wear but the pages are clean, intact and the spine remains undamaged. This book has clearly been well maintained and looked after thus far. Money back guarantee if you are not satisfied. See all our books here, order more than 1 book and get discounted shipping. Seller Inventory # 7719-9780753823170

Book Description Orion 03/03/2008, 2008. Paperback. Condition: Very Good. Shipped within 24 hours from our UK warehouse. Clean, undamaged book with no damage to pages and minimal wear to the cover. Spine still tight, in very good condition. Remember if you are not happy, you are covered by our 100% money back guarantee. Seller Inventory # 6545-9780753823170

Book Description Phoenix. Paperback. Condition: Very Good. No Jacket. A copy that has been read, but remains in excellent condition. Pages are intact and are not marred by notes or highlighting, but may contain a neat previous owner name. The spine remains undamaged. At ThriftBooks, our motto is: Read More, Spend Less. Seller Inventory # G0753823179I4N00