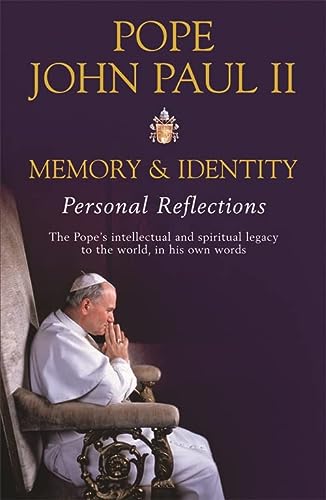 A truly historical document, Memory and Identity contains Pope John Paul II's personal thoughts on some of the most challenging issues and events of his turbulent times. Pope for over 26 years, he was one of the world's greatest communicators and this moving book provides a unique insight into his intellectual and spiritual journey and pastoral experience.

Each chapter suggests the answer to a question which either exercised his mind or which he provoked in discussion with laymen and priests. Using the encounters at his summer residence of Castel Gandolfo where conversations took place with leading intellectuals - philosophers as well as theologians - Pope John Paul II addressed in his book many of the questions which arose from these discussions.

Here he leaves for posterity an intellectual and spiritual testament in an attempt to seek the answer to defining problems that vex our lives.

I like my Popes intellectual. I like them citing Aristotle, Bentham, John Stuart Mill, Sartre and Dostoevsky.... It is gratifying, in this volume of conversations with Pope John Paul II to be treated to philosophical cogitation... John Paul II has long reflected upon such big ideas as freedom and responsibility, love and redemption, totalitarianism, capitalism and the nature of evil.... His account of surviving the assassin's bullet is both touching and human. (MARY KENNY NEW STATESMAN)

The 11 pages in Memory and Identity which deal with the assassination attempt are the most compelling in the book... Every detail is welcome. (CHRISTOPHER HOWSE DAILY TELEGRAPH)

this could very well be his last will and testament. (PETER STANFORD SUNDAY TIMES)

what this short memoir will do is establish a dialogue with scholars long after he is dead. (THE OBSERVER)

Whether this book is the Holy Father's valedictory is in surer hands than ours; his mind and his passion for truth are demonstrably undimmed. This book, in fact, may well serve as much as an introduction to his thought and teaching as a coda to it. For his spiritual vision, as well as all his other startling qualities, he is by anyone's standards the outstanding figure of our age. (CATHOLIC HERALD)

Philosophical and theological ideas feature but the style is more that of a reflective sermon. (THE SCOTSMAN)

this topical book will appeal to many as millions pay their last respects... this book manages to engage the reader with its informal style. (THE SUN)

Takes us further into the recesses of the late Pope's mind than any previous book. (DAMIAN THOMPSON (Editor in chief, Catholic Herald) IRISH INDEPENDENT)

a philosopher by inclination... a creative man, both poet and playwright and his philosophical musings are thus the product of an energetic mind and an assured pen. (THE HERALD)

How clever of veteran publisher, George Weidenfeld to persuade his friend Pope John Paul II to write his "final testament". The late Holy Father's deeply felt reflection on culture and national identity calls to each nation of Europe: preserve your heritage and bind it to Christ, as it has always been in the past. (WESTMINSTER CATHEDRAL MAGAZINE)