Items related to Autograph Man, The 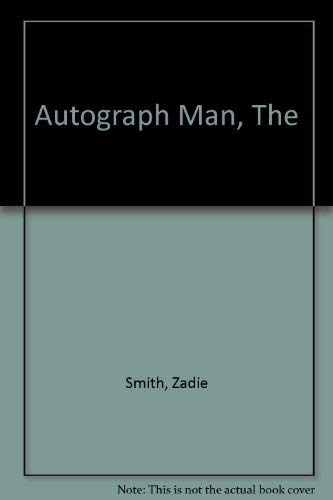 Alex-Li Tandem sells autographs. A small blip in a huge worldwide network of desire, it is his business to hunt for names on paper, collect them, sell them, occasionally fake them, and all to give the people what they want: a little piece of Fame.The Autograph Man is a deeply funny, existential tour around the hollow things of modernity - celebrity, cinema, and the ugly triumph of symbol over experience. Pushing against the tide of his generation, Alex-Li is on his way to finding enlightenment, otherwise known as some part of himself that cannot be signed, celebrated or sold.

In her second novel, The Autograph Man, Zadie Smith has set herself the unenviable task of following up a certain segment of recent literary history. Her first novel, the bestselling, award-laden and much-hyped White Teeth wore its ambitions lightly: an exuberant comic foray into the lives of three disparate families living in suburban north London, it dealt simultaneously--and deftly--with wider multicultural and political motifs.

The Autograph Man has a similar ebullience and an equally dazzling panoply of characters. Its hero Alex Li-Tandem is "one of this generation who watch themselves", a Chinese-Jewish north Londoner who is first introduced as a child accompanying his father to a wrestling match between those two larger-than-life scions of 1970s Saturday afternoon television--Big Daddy and Giant Haystacks. When Alex's father dies in the pandemonium surrounding the pursuit of Big Daddy's autograph, the twin themes of the novel are launched--one is the bereaved Alex's search for a replacement to fill the gulf, the other his obsession with tracking down, buying and selling autographs. Alex seeks one autograph in particular and seemingly in vain--that of Kitty Alexander, a fading film star. The route he follows in his search has much to say about the nature of celebrity and the privacy of souls, of fantasy and reality--all narrated in Smith's breathless prose.

The Autograph Man plays on many strands and clever observations--in particular Jewishness, goyishness and Zen Buddhism. Smith is a superbly assured writer whose images stick in the mind; for example, Alex's girlfriend Esther has "hair plaited like a puzzle". The dialogue is vivid and there is much humour but at times the convoluted plot threatens to spill over into anarchy and the humour can be self-conscious. Though this does not diminish the entertainment value of The Autograph Man, it does--frustratingly--make it appear insincere. --Catherine Taylor

One feels for Zadie Smith. She's had a reasonably well publicised case of writer's block and has wearied of the media treadmill that followed the success of her first novel, White Teeth. Her experiences of fame have clearly influenced her new novel which in part deals with the twin-headed beast of celebrity and recognition. Alex-Li Tandem collects and sells autographs. Sometimes the ones he sells are fake, "all to give the people what they want - a little piece of fame". The novel sounds distinctly autobiographical. No one knows better than Smith what a hollow world 'celebrity' occupies. This novel will doubtless puncture it with the same sharpness and panache that marked her famous debut.

Book Description BDS titles not on BD and which cannot be assigned, 2004. Condition: Fair. This book has soft covers. Ex-library, With usual stamps and markings, In fair condition, suitable as a study copy. Please note the Image in this listing is a stock photo and may not match the covers of the actual item,800grams, ISBN:9780753169483. Seller Inventory # 3643464

Book Description ISIS, 2004. Condition: Good. This is an ex-library book and may have the usual library/used-book markings inside.This book has soft covers. In good all round condition. Seller Inventory # 5251713