Items related to Once They Wore The Gray

Boggs, Johnny D. Once They Wore The Gray 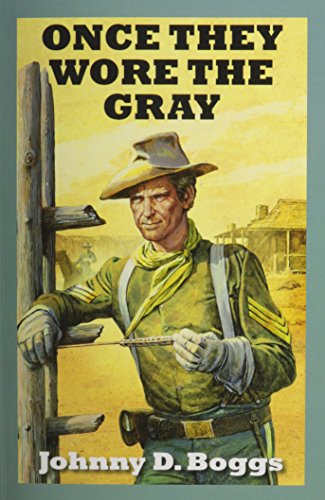 For Sergeant Gil Metairie and other prisoners of the Union Army during the War Between the States, captivity was more life-threatening than the battle lines. Every day at the Illinois prison brought another casualty from weakness or disease. The deplorable conditions forced many prisoners to agree to become "Galvanized Yankees," whereby they enlisted in the Union Army for at least one year to fight the Indians and keep the Santa Fe trail open for commerce. Frontier conditions for these soldiers were sometimes worse than the prisons. Fortunately, commanding officer Major John Rankin, is unusually understanding. Gil even finds himself attracted to the commander's daughter, who is sympathetic to the plight of the former Confederates. But the Indians are keenly aware of the opportunity the war is presenting them to end the presence of white men in their territory...

Johnny D. Boggs, born in South Carolina, published his first Western short story in 1983. A photographer as well as a full-time writer, he won a Spur Award in 2002 for his short story "A Piano at Dead Man's Crossing" and has enthralled lovers of Westerns with The Lonesome Chisholm Trail and Once They Wore Gray.

Book Description Condition: Good. This is an ex-library book and may have the usual library/used-book markings inside.This book has soft covers. In good all round condition. Please note the Image in this listing is a stock photo and may not match the covers of the actual item,450grams, ISBN:9780753153574. Seller Inventory # 8495244