Items related to A Question of Blood (A Rebus Novel)

Rankin, Ian A Question of Blood (A Rebus Novel)

A Question of Blood (A Rebus Novel) 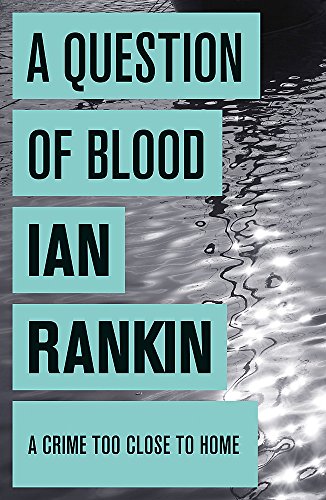 The fourteenth Inspector Rebus novel - and No.1 bestseller.

Two seventeen-year-olds are killed by an ex-Army loner who has gone off the rails. The mystery takes Rebus into the heart of a shattered community. Ex-Army himself, Rebus becomes fascinated by the killer, and finds he is not alone. Army investigators are on the scene, and won't be shaken off. The killer had friends and enemies to spare and left behind a legacy of secrets and lies.

Rebus has more than his share of personal problems, too. He's fresh out of hospital, but won't say how it happened. Could there be a connection with a house-fire and the unfortunate death of a petty criminal who had been harassing Rebus's colleague Siobhan Clarke?

Sometimes crime affects you directly: in A Question of Blood Inspector John Rebus is caught up in two cases that are closer to home than he would like. He is under investigation for the burning alive of a minor psychopath who threatened his attractive young sergeant Siobhan Clarke; and the son of an estranged cousin has been murdered in a high-school shooting.

As always in Rankin's novels, Rebus's bad attitude to his superiors comes back to bite him: even though doctors testify that damage to his hands is a scalding from trying drunkenly to get into an over-hot bath, it is regarded as circumstantial evidence of his possible guilt. The high-school shooting looks at first sight like another ex-SAS crazy going wild--and here Rebus's own past as an SAS washout comes to haunt him--and the constant meddling of army investigators screams cover-up. In fact, though, this is one of those occasions on which Rebus's slightly paranoid preparedness to see connections everywhere pays off and he manages to solve both crimes and a lot of other unsuspected pieces of mayhem besides. Along the way, the book offers Rankin's usual intense commentary on embattled masculinity and what it means to be a Scot, and this excellent sequence's usual portrayal of an Edinburgh where modernity rubs up against time-worn slums and ancient privilege. --Roz Kaveney

Splendidly-woven yarn...if there still are people unaware of Rankin and Rebus, this would make a great introduction

Rankin expertly keeps us on a knife-edge...He is on top form here - unremitting pleasure

You'll love every second of it

Exemplifies the enhanced craftmanship of the author's recent work; the sheer number of handicaps Rebus overcomes and of the puzzles he solves evinces a relishable virtuosity

A rich absorbing narrative in which the focus is not on who did it - that we know - but why. Artful, moving and entertaining

Ian Rankin's John Rebus...is a flawed but very human creation, and his Edinburgh and its inhabitants beautifully drawn and utterly real

Exceptionally well-plotted book, which is guaranteed to hook you and keep you hooked

Skilfully composed and powerfully written, with a vein of compassion that Rankin taps to startling and justified effect

1. A Question of Blood: An Inspector Rebus Novel

2. A Question of Blood (Inspector Rebus)

3. A Question of Blood (Inspector Rebus)

4. A Question of Blood (Inspector Rebus)