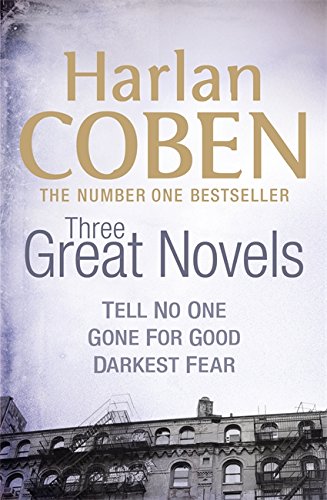 TELL NO ONE: Eight years ago David Beck was knocked unconscious and left for dead, and his wife Elizabeth kidnapped and murdered. Every day since, the horror has haunted him. Now Beck is faced by an email that links him to a webcam image of Elizabeth. But as he tries to find out if his wife is alive and what really happened the night she disappeared, the FBI are trying to pin Elizabeth's murder on him, and everyone he turns to seems to end up dead...

GONE FOR GOOD: When Ken Klein became the subject of an international manhunt, accused of a brutal murder, he vanished. His brother Will has tried to get on with his life in the intervening years. But when his mother reveals, on her deathbed, that Ken is still alive, and shortly afterwards Will's girlfriend Sheila disappears, the cracks start to show. But it is only when he finds that Sheila herself is wanted for a savage double murder that his life actually starts to fall apart.

DARKEST FEAR: Life isn't going well for Myron Bolitar. Business trouble, family trouble, and there's more on the horizon. Emily, Myron's college sweetheart, reappears in his life with devastating news: her son Jeremy is gravely ill and can be saved only by a bone marrow transplant from a donor who has vanished without trace. But for Myron, finding the only person who can save the boy's life means cracking open a mystery as dark as it is heartbreaking.

"A slam dunk ... You race to turn the pages ... both suspenseful and often surprisingly funny."--"People" "Terrific."--"Boston Globe" "A winner."--"Orlando Sentinel" "Fast-paced ... layered with both tenderness and fun ... Coben [is] a gifted storyteller."--"Denver Post"

A fantastic value omnibus that will be a must for Harlan fans and new readers alike.