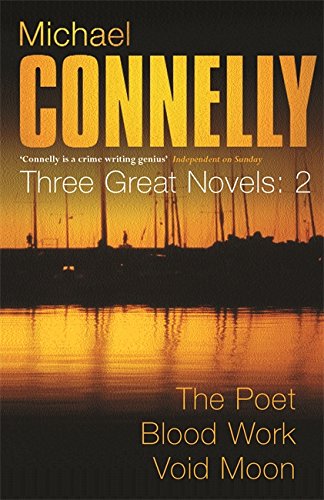 THE POET
Jack McEvoy's brother, a homicide detective, has just killed himself. Or so it would appear. When Jack, a Rocky Mountain beat reporter, begins to investigate the phenomenon of police suicides, a disturbing pattern emerges, and he soon suspects that a serial murderer is at work.

BLOOD WORK
Thanks to a heart transplant, former FBI agent Terry McCaleb is enjoying a quiet retirement. And then he learns that the previous owner of his heart was not - as he'd been told - killed in an accident, but murdered. Reactivating his connections and his expertise, McCaleb embarks on a private investigation of his donor's murder, leading to a killer as audacious as himself.

VOID MOON
Cassie Black is lured back to robbing casino gamblers by a set-up that is too good to ignore. Soon she finds herself running from a stone-cold killer who somehow knows her every move in advance, and who appears to be closing in on Cassie's most closely guarded secret - the one she will do anything to protect.

If you have never read Michael Connelly, you couldn't have a better introduction than this volume of three outstanding novels. 'Guaranteed to keep you riveted until the very last page. No one writes a better modern thriller than Connelly' Time Out

A former police reporter for the Los Angeles Times, Michael Connelly is the author of seven acclaimed Harry Bosch novels, as well as The Poet, Blood Work and Void Moon. He lives in Los Angeles.