Items related to The Ten Thousand 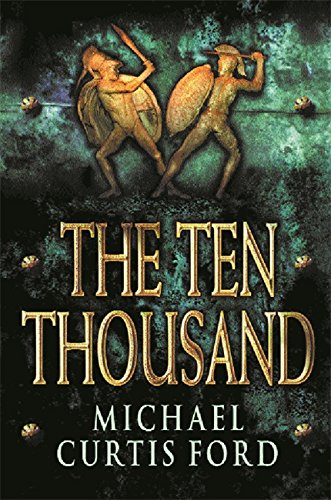 żWe know that Tissaphernes has seized from us everything he could. He thinks we are down, and he plans to destroy us and rid the country of us. But he is a barbarian! We must turn the tables on him, do everything we can not to fall into his hands. We have the more powerful weapon ż ten thousand strong, skilled, cohesive fighting men. And you know that it is not numbers or strength that bring victory in war, but rather fortitude and willingness of soul. Whichever army is more determined, that is the one that will prevail. Learn this lesson and apply it. Be men! And you can be sure others will follow.ż

It is the beginning of winter, 410 BC. With these stirring words Xenophon inspires the few remaining officers of the Greek army to rally their troops. Leadership is forced upon him after the treacherous slaughter of his senior comrades in arms. Trapped far from home in hostile Persian territory, they are only ten thousand men against a Persian enemy ten times larger. Many months later, ten thousand battered, half-starved Greek soldiers stagger out of the frozen mountains of Armenia into a small Hellenic trading post on the eastern Black Sea. Their tale of survival has been the stuff of legend ever since. Here the story is told in the form of a memoir from the viewpoint of Theo, Xenophonżs battle squire, who had been his servant since Xenophonżs birth. Theożs position affords him a unique view of the brutality and heroism of 5th century BC Greek warfare. He approaches his role as żstorytellerż with relish and seriousness, to the point at times of a most endearing pomposity. THE TEN THOUSAND is a truly heroic tale told with marvellous detail, style and panache.

Outstanding epic adventure and story of survival against all odds set in ancient Greece. In the vein of GATES OF FIRE by Steven Pressfield, but also taps into such classics as I, CLAUDIUS and MEMOIRS OF HADRIAN.

Michael Ford is 39 years old and runs his own foreign language translation agency. He has a bachelorżs degree in romance linguistics from the university of Washington and a masterżs in economics from Princeton. He speaks Spanish, French, Portuguese and Latin, and is an avid reader of the classics. With the wealth of stories uncovered during the research for THE TEN THOUSAND, he will plot his second novel around an ancient civilisation.

Book Description Hardcover. Condition: Used; Good. Dispatched, from the UK, within 48 hours of ordering. This book is in good condition but will show signs of previous ownership. Please expect some creasing to the spine and/or minor damage to the cover. Aged book. Tanned pages and age spots, however, this will not interfere with reading. Seller Inventory # CHL7521032

Book Description Hardcover. Condition: Used; Good. Dispatched, from the UK, within 48 hours of ordering. This book is in good condition but will show signs of previous ownership. Please expect some creasing to the spine and/or minor damage to the cover. Grubby book may have mild dirt or some staining, mostly on the edges of pages. Seller Inventory # CHL7453366

Book Description Condition: Very Good. This book is in very good condition and will be shipped within 24 hours of ordering. The cover may have some limited signs of wear but the pages are clean, intact and the spine remains undamaged. This book has clearly been well maintained and looked after thus far. Money back guarantee if you are not satisfied. See all our books here, order more than 1 book and get discounted shipping. . Seller Inventory # 7719-9780752841564

Book Description Condition: Very Good. Shipped within 24 hours from our UK warehouse. Clean, undamaged book with no damage to pages and minimal wear to the cover. Spine still tight, in very good condition. Remember if you are not happy, you are covered by our 100% money back guarantee. Seller Inventory # 6545-9780752841564

Book Description Hardcover. Condition: Good. No Jacket. Item is in good condition. Some moderate creases and wear. This item may not come with CDs or additional parts including access codes for textbooks. This may not have a dust jacket. Might be an ex-library copy and contain writing/highlighting. Photos are stock pictures and not of the actual item. Seller Inventory # DS-0752841564-3