Items related to Fleeing from the Fuhrer: A Postal History of Refugees... 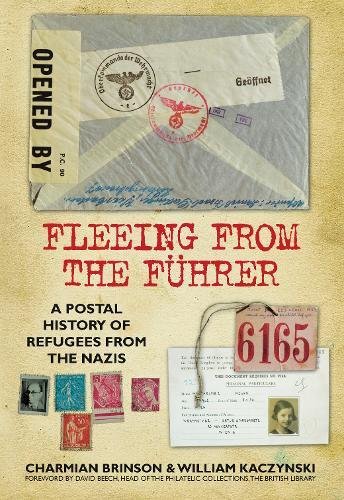 The Jewish flight from Nazi Germany was one of the largest diasporas the world has ever seen. It sparked an international refugee crisis that changed society and continues to shape our culture and community today.

Imagine leaving everything you love behind you and being separated from your family and friends without knowing when or if you will ever see them again. The only lifeline these refugees had was short postcards and letters to let each other know they were still alive. Many of these were sent from internment camps which were established worldwide to deal with the overwhelming number of asylum seekers.

Fleeing from the Führer is a unique collection of correspondence that shows the incredible nature of this worldwide emigration and the indomitable spirit of these Jewish refugees. Each postcard is reproduced in full colour, making this a fascinating resource for the general reader, as well as those interested in Jewish history or postal history.

This extraordinary book tells the story of refugees from Nazi Germany through the form of letters, envelopes, postcards and other ephemera exchanged across the miles, collected by William Kaczynski, whose own Jewish parents managed to reach the relative safety of the UK just before war broke out in 1939. They were not alone Hitler s rise to power led to the mass emigration of European Jews in the late 1930s. Many were initially interned in their host countries, including the co-author as a small boy. Others in occupied Europe were, as we know, deported to death camps where millions perished. Each letter or document here reveals a poignant story, but united they present an absorbing postal history of the Holocaust experience. --Family Tree Magazine

William Kaczynski came to England with his family in 1939 as a refugee from Nazi Germany. He was interned, with his mother and brother for ten months in Rushen Camp on the Isle of Man. He retired in 1989 and has since amassed this important collection of Second World War postal history artefacts. He has written widely for philatelic publications and has worked closely with the British Library in compiling the collection featured. Co-author, Charmian Brinson, is Professor of German Studies at Imperial College, London. She is a founder member of the Research Centre for German and Austrian Exile Studies, and has published extensively on German speaking exiles in Britain. Both authors live in London.

1. Fleeing from the F??hrer: A Postal History of Refugees from the Nazis [Hardcover] Kaczinski, William and Brinson, Charmian

2. Fleeing from the Führer: A Postal History of Refugees from the Nazis

3. Fleeing from the Führer: A Postal History of Refugees from the Nazis