Items related to Escape from St Valery-en-Caux: The Adventures of Captain... 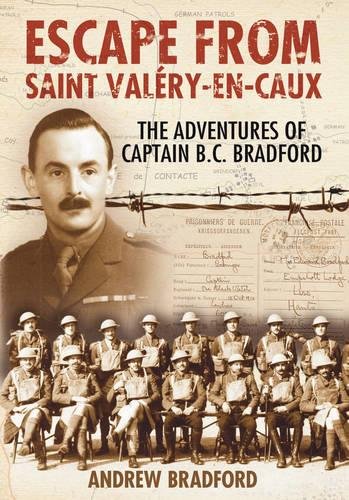 The dramatic story of Captain Berenger Colborne Bradford, Adjutant of the 1st Battalion Black Watch, compiled by his son using diaries and letters, coded messages and correspondence between his family and the War Office in their desperate effort to hear news of his safety. This book tells of Captain Bradford's experiences between 1939 and 1941, during which time he was in the thick of the action in France, leading up to the surrender of the Highland Division at Saint Valery-en-Caux in June 1940. While being marched into captivity Capt. Bradford managed to escape once from the Germans and then seven further times from the Vichy French. This account details his journey to safety in Gibraltar, spanning France, Spain and North Africa, including a night crossing of the Pyrenees and an astonishing 700-mile voyage in a 17ft sailing boat.

1. Escape from Saint Valery-en-Caux: The Adventures of Captain B.C. Bradford