Items related to Great Dishes of the World

Great Dishes of the World 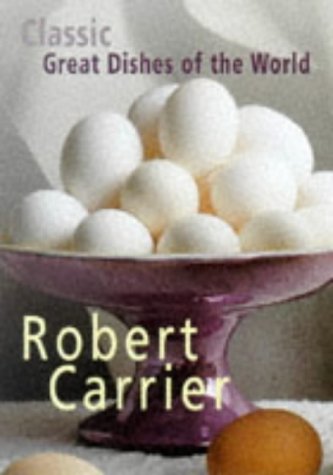 First published in 1963, this is a cook's tour of the world which became an international bestseller in 11 languages. It presents over 500 recipes based on universal favourites, rustic surprises and culinary elegance. The recipes are accompanied by basic practical guidance.

Old wine, new bottle. Classic Great Dishes of the World is a most welcome re-issue of the book with which Robert Carrier established his reputation back in 1963. Some might regret the rather sober (put crudely, cheap) presentation, as this sparsely-illustrated paperback gives little idea of the splendours of the lavish original edition--which retailed "at the unbelievable price of four guineas (approximately £60 at today's prices)", as Robert Carrier proudly relates. Still, the recipes are the thing; and we should be grateful, for this was almost without doubt the book which ensured the familiarity of, say, Gazpacho, Paella, Guacamole, Moules Marinieres, Moussaka, Osso Buco, Boeuf Stroganoff, Fillet of Beef 'en Chemise' (better known as Beef Wellington), Gratin Dauphinois, Crepes Suzette, French Lemon Tart ... all those wonderful Sixties dinner-party dishes that right-thinking cooks are re- introducing to their repertoires. Elizabeth David was of course there first in bringing Mediterranean flavours and a sense of style to grey post-war England: she whetted the appetite, but it was Robert Carrier who triumphantly brought detailed, practical recipes for these great dishes to Anglo-Saxon kitchens. The slightly old-fashioned air of luxury about many of the dishes (lobster, souffles, truffled pates) adds to the charm. This is an important book for all sorts of reasons. One could cook one's way through it indefinitely. It belongs in general circulation. --Robin Davidson

1. Classic Great Dishes of the World

Book Description Pan Macmillan. Paperback. Condition: Good. A copy that has been read, but remains in clean condition. All pages are intact, and the cover is intact. The spine may show signs of wear. Pages can include limited notes and highlighting, and the copy can include previous owner inscriptions. An ex-library book and may have standard library stamps and/or stickers. At ThriftBooks, our motto is: Read More, Spend Less. Seller Inventory # G0752221671I3N10

2. Great Dishes of the World

Book Description Paperback. Condition: Good. The book has been read but remains in clean condition. All pages are intact and the cover is intact. Some minor wear to the spine. Seller Inventory # GOR001986542

3. Great Dishes of the World

Book Description Paperback. Condition: Very Good. The book has been read, but is in excellent condition. Pages are intact and not marred by notes or highlighting. The spine remains undamaged. Seller Inventory # GOR001583079

4. Great Dishes of the World

Book Description Paperback. Condition: Fair. A readable copy of the book which may include some defects such as highlighting and notes. Cover and pages may be creased and show discolouration. Seller Inventory # GOR002494230

5. Classic Great Dishes of the World

Book Description Boxtree Ltd, 1999. Condition: Good. A+ Customer service! Satisfaction Guaranteed! Book is in Used-Good condition. Pages and cover are clean and intact. Used items may not include supplementary materials such as CDs or access codes. May show signs of minor shelf wear and contain limited notes and highlighting. Seller Inventory # 0752221671-2-4