Items related to Kingdom of the Blind (Chief Inspector Gamache) 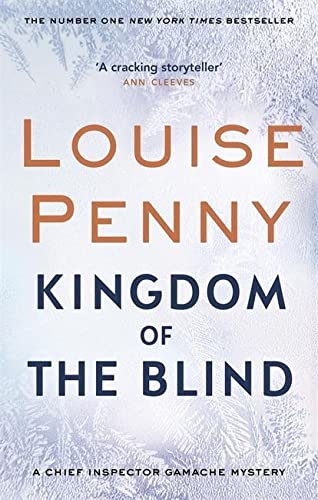 When Armand Gamache receives a letter inviting him to an abandoned farmhouse outside of Three Pines, the former head of the Sűreté du Québec discovers that a complete stranger has named him as an executor of her will. The bequests are so wildly unlikely that he suspects the woman must have been delusional - until a body is found.

But it isn't the only menace Gamache is facing. The investigation into the events that led to his suspension delves deeper, and he takes increasingly desperate measures to rectify previous actions. As he does, Gamache begins to see his own blind spots - and the terrible things hiding there . . .

'One of the most interesting detectives in crime fiction' The Times

'The series is deep and grand and altogether extraordinary . . . Miraculous' Washington Post

This edition contains bonus extra content from Louise Penny, including a map of Three Pines

Penny, as ever, skifully juxtaposes the supreme cosiness of the Quebec village of Three Pines, this time in the grip of a freezing winter, and the horrors of drugs and prostition on the streets of Montreal. Supremely satisfying. (Observer)

This gloriously shocking book grips from the very first page and spans centuries and continents, worlds and underworlds. Louise Penny is one of the greatest crime writers of our times (Denise Mina)

No one does atmospheric quite like Louise Penny. Kingdom of the Blind tackles some tough contemporary issues whilst retaining the timeless small-town charm of Three Pines. A wonderful addition to a fantastic series (Elly Griffiths)

Kingdom of the Blind is an ingenious mystery that follows a thoughtful group of beloved characters navigating their way through a fallen world. What more could a mystery reader - or any reader for that matter - want? (Washington Post)

Outstanding . . . a constantly surprising series that deepens and darkens as it evolves (New York Times)

The premise is an intriguing one . . . I loved the setting. A welcome return to Three Pines and its inhabitants. (Scotland on Sunday)

This starts as a small-town mystery and becomes something grander and more frightening; Penny has upped her thrills-to-pain au chocolat ratio (Kirkus)

Kingdom Of The Blind