Items related to From The Dead (Tom Thorne Novels)

From The Dead (Tom Thorne Novels) 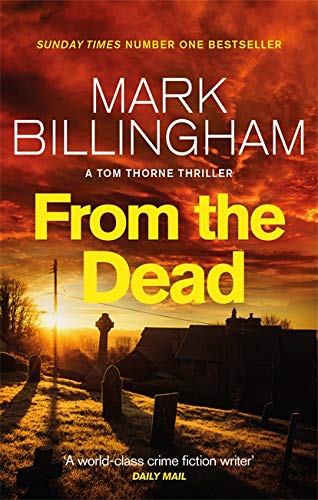 It has been a decade since Alan Langford's charred remains were discovered in his burnt-out car. His wife Donna was found guilty of conspiracy to murder her husband and served ten years in prison.

But just before she is released, Donna receives a nasty shock: an anonymous letter containing a photo of her husband. The man she hates with every fibre of her being - the man she paid to have murdered - seems very much alive and well.

How is it possible that her husband is still alive? Where is he? Who sent the photo, and why?

DI Tom Thorne becomes involved in a case where nothing and no one are what they seem. It will take him much further from his London beat than he has ever been before - and closer to a killer who will do anything to protect his new life.

When speaking to book groups, the author Mark Billingham displays the kind of sardonic humour that reflects his background in stand-up comedy. But his highly professional crime novels featuring DI Tom Thorne are quite unlike the humorous crime writing of such authors as Christopher Brookmyre. Books such as the latest Thorne, From the Dead, are odysseys into the darkest reaches of human behaviour. It's interesting that Billingham's books have a reputation for extreme violence, as they actually deal more in the purveying of atmosphere – a real sense of dread is unerringly conveyed to the reader.

A man is burnt to death in a car in Epping Forest, the victim of professional hitmen. The evidence suggest that the dead man’s wife, Donna Langford, hired the killers, and she is found guilty of conspiracy to murder. A decade passes, and just before her release from prison, Donna is sent a photo: it is that of her supposedly murdered spouse. Is he, in fact, dead? And if not, whose was the charred body in the burnt-out Jaguar? Shortly after, DI Tom Thorne is contacted by a woman, Anna Carpenter. Anna is making a living (and hating it) by working for a detective agency that cynically uses her as a ‘pretend prostitute’ to trap men into sexually compromising set-ups in divorce cases. Anna is on the side of the worried Donna Langford, and asks a reluctant Thorne for help. The detective is not to be persuaded – until he realises that the supposedly late Alan Langford is very much alive, and wants payback – in the worst way.

Mark Billingham is (as ever) to be applauded for the sheer readability of his work on From the Dead, but his most impressive achievement is the sure-footed orchestration of tension. He avoids artificially pushing Thorne into uncharactistic behaviour, and trusts that we will accept the familiar character tropes, delivered as effectively as ever. But if there are no surprises in the development of his main protagonist, Billingham’s real achievement here is in the creation of the vulnerable, compromised tyro detective, Anna – she’s a wonderful creation. --Barry Forshaw

'While Billingham has well and truly mastered the modern police procedural, the thing that sets him apart from the crowd is not just his emotional insight, but the way he invariably packs such a heart-wrenching punch... Billingham's most desperately gripping read yet (Mirror)

As fictional detectives go, Thorne is one of the most believable and Billingham's deserved status as a world-class crime fiction writer will surely be confirmed when a new television series based on some of his novels is aired this autumn (Daily Mail)

Billingham is well aware that we're au fait with most police procedural scenarios and is always working to ring clever and inventive changes on the formula...the tension is fine-tuned with all the usual skill (Daily Express)

Most fictional sleuths are flawed but invariably triumphant; Billingham is unusually willing to show his series hero making blunder after blunder (Sunday Times)

1. From the Dead (Paperback)

Book Description 2011. Paperback. Condition: New. Paperback. It has been a decade since Alan Langford's charred remains were discovered in his burnt-out car. His wife Donna was found guilty of conspiracy to murder her husband and served ten years in.Shipping may be from multiple locations in the US or from the UK, depending on stock availability. 496 pages. 0.342. Seller Inventory # 9780751540031

3. From the Dead (Paperback)

Book Description 2011. Paperback. Condition: New. Paperback. It has been a decade since Alan Langford's charred remains were discovered in his burnt-out car. His wife Donna was found guilty of conspiracy to murder her husband and served.Shipping may be from our Sydney, NSW warehouse or from our UK or US warehouse, depending on stock availability. 496 pages. 0.342. Seller Inventory # 9780751540031

6. From the Dead Billingham, Mark