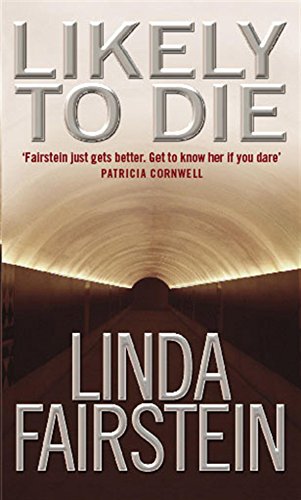 A neurosurgeon is sexually assaulted, stabbed and left for dead in her office at the labyrinthine Mid-Manhattan Medical Centre. The police designate her Likely to Die. Alexandra Cooper, head of the district's sex crimes unit, assembles a task force to investigate but finds herself hindered at every turn. Not only has her office prosecuted some of the vast hospital's patients and staff before but the building itself compounds the problem. A vast complex encompassing a medical college and the Stuyvesant Psychiatric Centre, the hospital rises over a network of tunnels now occupied by numberless transients who have easy access to the corridors. Strung out with other cases and mired in the investigation personally when even the man she has begun to date, has a connection to the case, Alex must find the killer - before the killer finds her.....

Fairstein just gets better. Get to know her if you dare. (Patricia Cornwell)

An authoritive and scary view from one who has battered evil and locked it away. (Patricia Cornwell)

Has the impact of early Cornwell. (Time Out)

New York Times Book Review 8/24/97
In murder, as in real estate, location is everything. So when a prominent doctor is found raped and stabbed in her office at a prestigious New York hospital, she gets a final accolade: the murder makes page 1 of the newspapers.

"Likely to Die," Linda Fairstein's second novel, takes its title from police slang for a crime victim whose death is inevitable. As in her previous novel, "Final Jeopardy," the author (who works a day job as head of the Manhattan District Attorney's sex crimes unit) places a smart and driven Manhattan prosecutor named Alexandra Cooper at the center of the action. Since Dr. Gemma Dogen was a "single, professional woman, no children, no pets, no one to depend on her for contact," Alex is left to discover the victim through her work-which makes a suspect out of everyone at the hospital, staff and patients alike, not to mention all the vagrants who hang out in the tunnels beneath the building. Such a wide net might daunt some investigators, but not Fairstein's fearless heroine, whose portraits of her boss and fellow prosecutors are as engaging as her asides about history and neurology. Throw in a little romance, a hurried trip to England and a valentine to Martha's Vineyard, and the result is a stylish and oddly antic book, despite the gruesome nature of its subject. -Madeleine Blais

Book Description Sphere, 1999. Paperback. Condition: Used; Good. Dispatched, from the UK, within 48 hours of ordering. This book is in good condition but will show signs of previous ownership. Please expect some creasing to the spine and/or minor damage to the cover. Damaged cover. The cover of is slightly damaged for instance a torn or bent corner. Grubby book may have mild dirt or some staining, mostly on the edges of pages. Seller Inventory # CHL5902443

Book Description Sphere, 1999. Paperback. Condition: Used; Good. Dispatched, from the UK, within 48 hours of ordering. This book is in good condition but will show signs of previous ownership. Please expect some creasing to the spine and/or minor damage to the cover. Seller Inventory # CHL968932

Book Description Sphere 01/02/1999, 1999. Condition: Good. Will be shipped promptly from UK warehouse. Book is in good condition with no missing pages, no damage or soiling and tight spine. There may be some dog-eared pages showing previous use but overall a great book. Seller Inventory # 9053-9780751521207

Book Description -. Paperback. Condition: Very Good. Likely To Die (Alexandra Cooper) This book is in very good condition and will be shipped within 24 hours of ordering. The cover may have some limited signs of wear but the pages are clean, intact and the spine remains undamaged. This book has clearly been well maintained and looked after thus far. Money back guarantee if you are not satisfied. See all our books here, order more than 1 book and get discounted shipping. Seller Inventory # 7719-9780751521207

Book Description Time Warner Paperbacks, 2006. Paperback. Condition: Good. All orders are dispatched the following working day from our UK warehouse. Established in 2004, we have over 500,000 books in stock. No quibble refund if not completely satisfied. Seller Inventory # mon0000392013