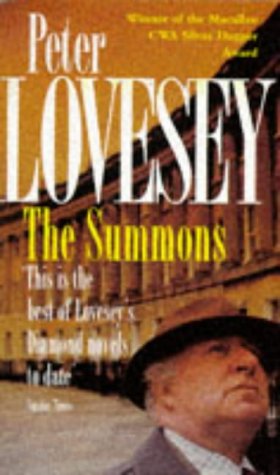 Summoned at night, Peter Diamond is collected from his West London flat by two policemen who drive him to bath, where once he headed the murder squad. Out of touch in his retirement, he knows nothing of an audacious escape from Albany Prison.
Four years before, he investigated the bizarre murder of a Swedish woman journalist. Now the convicted murderer is at large. Worse, he has already kidnapped the Assistant Chief Constable's daughter. His demand? That the case be re-examined. He will deal only with Diamond. In reopening this matter, Diamond faces a challenge that makes huge demands on his patience, to work with the senior policemen he scorns, and courage, to deal with the violent man he sent down.

A masterly surprise . . . the best of Lovesey's Diamond novels to date (Sunday Times)

This could be the jewel in Lovesey's crown (Yorkshire Post)

A good detective story in the traditional manner, written with energy and style.

Book Description Paperback. Condition: Very Good. The book has been read, but is in excellent condition. Pages are intact and not marred by notes or highlighting. The spine remains undamaged. Seller Inventory # GOR001336000

Book Description Paperback. Condition: Good. The book has been read but remains in clean condition. All pages are intact and the cover is intact. Some minor wear to the spine. Seller Inventory # GOR001550022

Book Description Paperback. Condition: Fair. A readable copy of the book which may include some defects such as highlighting and notes. Cover and pages may be creased and show discolouration. Seller Inventory # GOR001416126