Items related to Encyclopedia of Dinosaurs and Prehistoric Life

Encyclopedia of Dinosaurs and Prehistoric Life 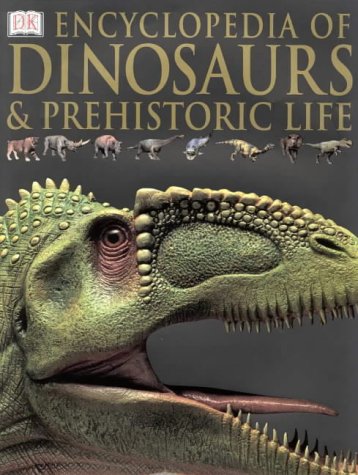 The DK Encyclopedia of Dinosaurs and Prehistoric Life is a big book packed with information for the general reader and hundreds of colour illustrations which cover the whole range of fossil life from microbes over 3-billion years old through the dinosaurs to the Dodo which became extinct in 1680. One of the new generations of fossil books, it uses computer-generated images to produce very lifelike colour reconstructions of long dead creatures. From the wonderful picture of a 400 million year old sea scorpion set against a real coral reef to an extinct elephant that died out around 2-million years ago set in savannah grasslands, many of the pictures look wonderfully convincing. Natural history illustration is never going to be quite the same again.

The bulk of the book illustrates the variety and evolution of fossil life from the extinct trilobites and a selection of other invertebrates through fish, amphibians, reptiles including the dinosaurs of the title and so on to humans. Following the traditional Dorling Kindersley format, the reconstructions of individual animals are supported by data, descriptions and other illustrations of the fossils that their constructions are actually based on. The accurate and informative text has been written by an award winning British science writer David Lambert, Darren Naish an expert on dinosaurs and Elizabeth Wyse, a writer and editor who has contributed to many DK titles. The hundred or so pages of the reference section include geological history and life, famous fossil sites, how to study fossils in the lab and field, biographies of famous fossil finders and a glossary and index. Some of this material, especially the fossil photos are reused from earlier DK books but they are of such high quality that one cannot complain too much about seeing them again. Altogether, the book is exceptional value for any fossil fan and one of the best of the plethora of fossil books.--Douglas Palmer

David Lambert won the Rhone Poulenc Prize for Junior Science Books for DK's Ultimate Dinosaur Book in 1994. Darren Naish works within the Palaeobiology Research Group at the University of Portsmouth. Elizabeth Wyze has contributed to many DK titlesincluding Millennium Family Encyclopedia and Children's Illustrated Encyclopedia. Consultant, Mark Norell, is the co-curator at the Halls of Dinosaurs at the AMNH Consultant, Jim Meng, is the assistant curator of Vertebrate Palaeontology at the AMNH

1. Encyclopedia of Dinosaurs and Prehistoric Life