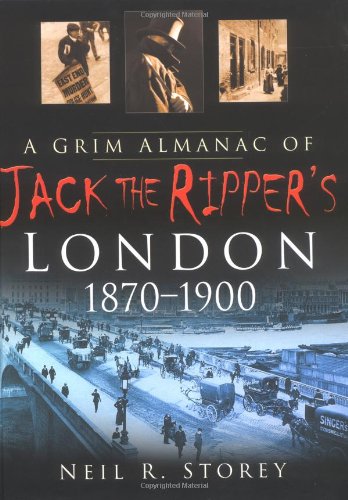 Did you know? - On 15 November 1892 as Dr Neill Cream dropped through the gallows trap at Newgate he declared 'I'm Jack the ...'. (Cream was in prison in America at the time the Ripper murders were committed) - In November 1887 there was a pitch battle in Trafalgar Square between those so poor they took to camping there and 2,000 policemen and soldiers. The event became known as 'Bloody Sunday'. - In December 1884 after bombs had been successfully detonated near Trafalgar Square and Scotland Yard a terrorist dropped another over one of the parapets of London Bridge and only succeeded in killing himself. - By the mid-nineteenth century the graveyards of London became so full a vast cemetery was established at Woking in Surrey. Opened in 1854 and known as Brookwood Cemetery or The London Necropolis it was even served by its own railway - the Necropolis Light Railway where the deceased's last one-way ticket could even be bought in first, second or third class. Neil Storey macabre calendar chronicles the darker side of life in the London between 1870 and 1900. Murderers and footpads, pimps and prostitutes, riots, rebels, bizarre funerals, disaster and peculiar medicine all feature. The book will be illustrated with engravings, newspaper reports, photographs and original documents.

Neil Storey has a special knack for unearthing the grim and gory side of life. He has written extensively for Sutton. His most recent books include Grim Almanac of Norfolk and Suffolk.

Book Description The History Press Ltd, 2004. Hardcover. Condition: Used; Good. **SHIPPED FROM UK** We believe you will be completely satisfied with our quick and reliable service. All orders are dispatched as swiftly as possible! Buy with confidence! Aloysius Ihezie. Seller Inventory # mon0001659977

Book Description Hardback. Condition: Very Good. The book has been read, but is in excellent condition. Pages are intact and not marred by notes or highlighting. The spine remains undamaged. Seller Inventory # GOR004991251

Book Description Sutton., 2004. Hardcover / Hardback. Condition: Fine. First edition. Hardback. Murder, dark deeds and macabre events in Victorian London. Did you know? When the police seemed to make no progress in the hunt for Jack the Ripper it was suggested some of the East End's best-trained boxers should be dressed in women's clothes and walk the streets in an attempt to lure the killer into making an attack. At the time of the Ripper murders it was estimated that 80,000 prostitutes worked the streets of London. Living conditions in tenement housing were atrocious: one sanitary inspector reported finding a father, mother, 3 children and 4 pigs all inhabiting a single filthy room. On November 15, 1892, as Dr. Neill Cream dropped through the gallows trap at Newgate, he declared 'I'm Jack the.' - he wasn't. This almanac explores dreadful deeds, macabre deaths, strange occurrences and grim tales from the darker side of the capital's past. Jostling for position in this cornucopia of the criminal and the curious are diverse tales of baby farmers, garotters, murderers, poisoners, prostitutes, pimps, rioters and rebels. Other tales tell of those who walked the poverty-stricken streets of 'the abyss', trying to earn a few honest coppers by the most unusual and desperate occupations, from tater man to tosher. This colourful cast of characters is accompanied by accounts of prisons and punishments, as well as a liberal smattering of funerals, executions, disasters and bizarre events. Profusely illus. 191pp. 4to. h/back. Pictorial glazed covers. F. dw. not required. Scarce in h/back. A fairly heavy book which may require additional postage if shipped overseas. Seller Inventory # 5661