Items related to The Roots of Evil: A Social History of Crime and Punishment...

Christopher Hibbert The Roots of Evil: A Social History of Crime and Punishment (Sutton History Classics)

The Roots of Evil: A Social History of Crime and Punishment (Sutton History Classics) 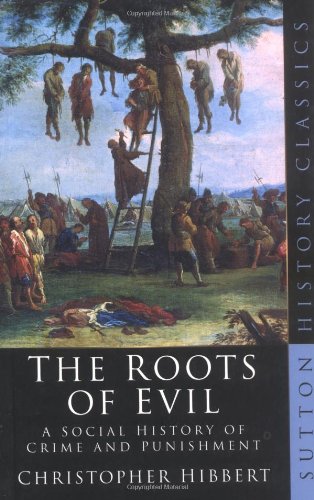 In this age of burgeoning prison populations, of fascination with details of crime whether by psychopaths or politicians, this re-issue of Christopher Hibbert's classic social history of crime and punishment is timely. The author's immensely readable narrative takes the reader through the lurid story of crime, detection, conviction and punishment. He discusses murder as a lust and murder as a trade: mutilation, torture, lynching and flogging: the guillotine, the gallows and the gas chamber; outlaws of the forest and the street; the Surete,Scotland Yard and the FBI; sexual crimes,police corruption and under-age offenders. From the Dark Ages to the measured steps to the reform of penal sanctions of more recent years, this balanced guide to society's ills is a compelling read.Throughout, Hibbert argues that cruel punishments will inevitably have the effect of creating cruelty. There is no book like Hibbert's currently available: intelligent, wide-ranging and accessible. The issues of crime and punishment and of society's responsibilities in this regard continue to be debated and popular culture seems to be obsessed with crime. Liverpool University reports something like a hundred applicants for every place on its criminal profiling course. Hibbert's engrossing and eminently balanced account has never been more timely.

Christopher Hibbert was born in Leicestershire in 1924 and educated at Radley and Oriel College, Oxford. He served as an infantry officer during the war: was twice wounded and was awarded the Military Cross in 1945: Described by Professor J.H.Plumb as a writer of the highest ability' and in the New Statesman as a 'pearl of biographers.

1. The Roots of Evil: A Social History of Crime and Punishment (Sutton History Classics)

3. THE ROOTS OF EVIL: A SOCIAL HIST

4. The Roots of Evil: A Social History of Crime and Punishment (Sutton History Classics)