Items related to The Big Bang: The History of Explosives

Brown, G. I. The Big Bang: The History of Explosives

The Big Bang: The History of Explosives 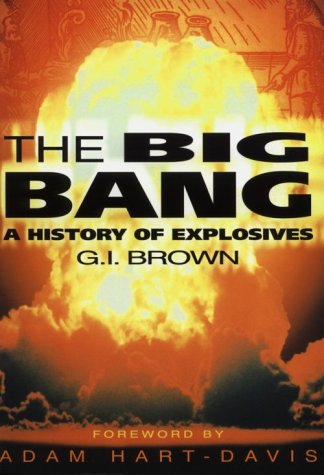 The tale of explosives from gunpowder to the H-bomb. Laying the emphasis on the lives of those involved, on the diverse uses of explosives and their social and historical impact, the author relates a story of international human endeavour. Many of those involved - Roger Bacon, Guy Fawkes, Alfred Nobel, Robert Oppenheimer - are famed worldwide; others, such as C.F. Schonbein, William Bickford, Sir Frederick Abel and Charles E. Munroe, though less well-known, also played crucial roles. Alongside these individuals' achievements, the book highlights the uses and impact of explosives in both war and terrorism, and in civil engineering, quarrying, mining, demolition, fireworks manufacture and shooting for sport. In many cases, explosives are seen to have had a significant historical impact as, for example, in the early use of gunpowder in the American Civil War, the defeat of the Spanish Armada and the worldwide opening up of canals and railways.

Interesting, informative and entertaining
There are a number of good books on explosives written for the professional, but I have tried to tell their tale in a non-technical way by laying the emphasis on the people concerned, on the various uses of explosives,and on their historical and social impact. Dr.Adam Hart-Davis refers to my work as a 'splenid book', and writes that I have done an 'excellent job of weaving together the strands of history, biography, politics and science'. The British Army Review summarises the book as an 'interesting, informative and entertaining read'. Chemistry and Industry refers to a 'fascinating book which is an impressive undertaking.' The School Science Review says that 'it is a fascinating read' and 'so well written that the story flows along and holds the reader enthralled'. And Chemistry in Britain 'thoroughly recommends it to all school and university libraries'.

G. I. Brown served as a technical officer with Special Operations Executive in England and with the Services Reconnaissance Department in Australia. Thereafter, he taught chemistry and was a housemaster at Eton College until he retired.

1. The Big Bang: History of Explosives Brown, G. I.

2. The Big Bang: A History Of Explosives

3. The Big Bang: A History of Explosives

4. The Big Bang: A History of Explosives