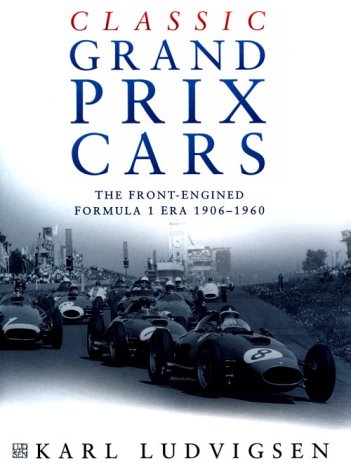 An illustrated history of the development of front-engined racing Formula 1 cars. The author builds from the technical evolution of the cars, era by era. He accompanies this with insights into the rise and fall of the famous manufacturers whose creations were the ultimate expression of the motoring know-how of their day. Ludvigsen takes the reader from the early days of the Formula 1 Grand Prix car through to the 1950s, giving a glimpse at drivers, managers and engineers who contributed to the classic era of Grand Prix racing.

Evolution of the World's Greatest Cars
My aim in writing this book was to look behind the scenes at the many forces -- personal, technical, economic, political and historical -- that guided the development of the world's finest racing cars from the beginning of Grand Prix racing in 1906 to the end of the front-engined era in 1960. I first refined my ideas about this in a series of articles for Automobile Quarterly. These ideas have been further developed in this book, which also gives a sense of the atmosphere of each decade with extracts from contemporary race reports. We have also been able to include some wonderful photos from the Ludvigsen Library. I hope the book will help today's enthusiasts appreciate that Formula 1 racing didn't begin in 1950! That was just the first year of the world championship for drivers.