Items related to The Practice of Management (Classic Drucker Collection) 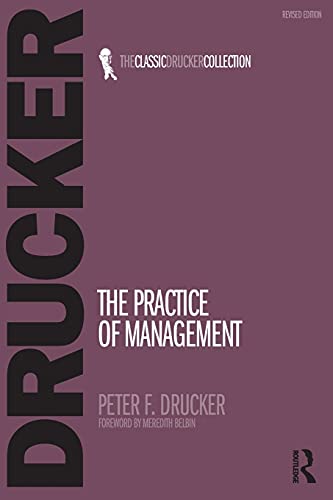 'It is a tour de force, brilliantly conceived and admirably carried out. It is original, stimulating and full of wisdom. Every manager in British business should buy a copy. Boards of directors might well consider presenting one to every executive.'
The Times Review of Industry
'This is one of the best and certainly the most stimulating of books on management that had appeared for some years. Those who now manage ought to read it: those who try to teach management ought to buy it.'
The Times Educational Supplement

Born in Vienna in 1909, Peter F. Drucker was educated in Austria and England. From 1929 he was a newspaper correspondent abroad and an economist for an international bank in London. Since 1937 he has been in the United States, first as an economist for a group of British banks and insurance companies, and later as a management consultant to several of the country's largest companies, as well as leading companies abroad. Drucker has since had a distinguished career as a teacher, first as Professor of Politics and Philosophy at Bennington College, then for more than twenty years as Professor of Management at the Graduate Business School of New York University. Since 1971 he has been Clarke Professor of Social Science at Claremont Graduate School in California. In addition to his management books, Peter Drucker is also renowned for his prophetic books analysing politics, economics and society. These books span fifty years of modern history beginning with The End of Economic Man (1939) and including The Practice of Management; Innovation and Entrepreneurship; Managing in the Next Society; Management Challenges in the 21st Century; The Effective Executive and The Essential Drucker.

1. The Practice of Management

2. The Practice of Management (Paperback)

Book Description Taylor & Francis Ltd, United Kingdom, 2007. Paperback. Condition: New. UK ed. Language: English. Brand new Book. This classic volume achieves a remarkable width of appeal without sacrificing scientific accuracy or depth of analysis. It is a valuable contribution to the study of business efficiency which should be read by anyone wanting information about the developments and place of management, and it is as relevant today as when it was first written. This is a practical book, written out of many years of experience in working with managements of small, medium and large corporations. It aims to be a management guide, enabling readers to examine their own work and performance, to diagnose their weaknesses and to improve their own effectiveness as well as the results of the enterprise they are responsible for. Seller Inventory # AA69780750685047

3. The Practice of Management

6. The Practice of Management

7. The Practice of Management

8. The Practice of Management

9. The Practice of Management