Items related to The Huge Bag of Worries

The Huge Bag of Worries 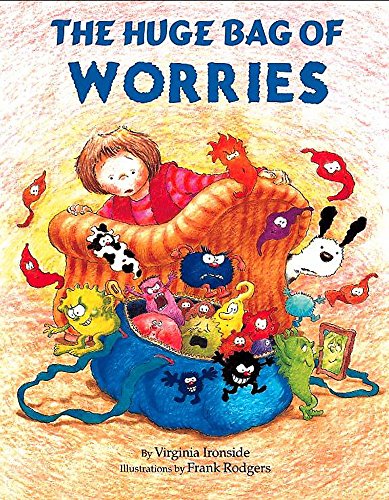 The usually happy Jenny has started to have lots of worries until they grow into a huge bag of worries that follow her everywhere. She won't get rid of them until she opens them up and confronts them one by one.

This book can be read millions of times when you are worried. * BOOKS FOR KEEPS *

Virginia Ironside is best known as one of Britain's leading agony aunts. She started on WOMAN magazine before moving to THE SUNDAY MIRROR and TODAY newspapers. She now writes a weekly column for THE INDEPENDENT. She also appears regularly on radio and television on such programmes as Radio 4's 'Woman's Hour'. Her many books include self-help titles on subjects such as bereavement, as well as the children's spooky adventure series BURLAP HALL.

1. The Huge Bag of Worries

Book Description Paperback. Condition: Very Good. The book has been read, but is in excellent condition. Pages are intact and not marred by notes or highlighting. The spine remains undamaged. Seller Inventory # GOR001338820

2. The Huge Bag of Worries

Book Description Paperback. Condition: Good. The book has been read but remains in clean condition. All pages are intact and the cover is intact. Some minor wear to the spine. Seller Inventory # GOR001356257

3. The Huge Bag of Worries

4. The Huge Bag of Worries

Book Description Wayland, 1996. Paperback. Condition: Good. The free end page has been removed. Good condition is defined as: a copy that has been read but remains in clean condition. All of the pages are intact and the cover is intact and the spine may show signs of wear. The book may have minor markings which are not specifically mentioned. Most items will be dispatched the same or the next working day. Seller Inventory # mon0015689627

Book Description Hachette Children's Group, 1996. Condition: Good. Ships from the UK. Shows some signs of wear, and may have some markings on the inside. Seller Inventory # 17854380-20

6. The Huge Bag of Worries

Book Description Wayland Pub Ltd 1996-09-01, 1996. Paperback. Condition: Good. Item is in good condition. Some moderate creases and wear. This item may not come with CDs or additional parts including access codes for textbooks. Might be an ex-library copy and contain writing/highlighting. Photos are stock pictures and not of the actual item. Seller Inventory # DS-0750021241-3