Items related to The Wind Singer (The wind on fire)

Nicholson, William The Wind Singer (The wind on fire)

The Wind Singer (The wind on fire) 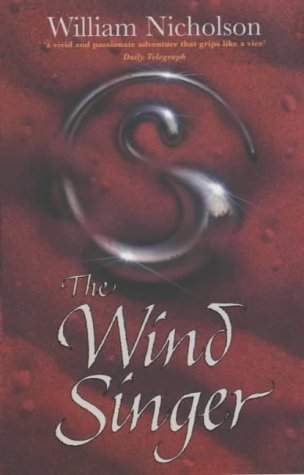 In Aramanth, exams are everything, deciding where people should live and what they should wear. When Kestrel rebels, her family are sentenced to the harshest punishment. In order to save them and to restore happiness to Aramanth, Kestrel knows she must restore the voice of the wind singer, an ancient statue standing in the city's square. She embarks on this dangerous mission with Bowman, her twin, and along the way they encounter Mumpo, the silly, smelly school dunce who adores Kestrel. Their daring journey encompasses the Mudpeople, the malevolent Old Children and bloodthirsty desert tribes.

The Wind Singer is the first novel in a trilogy that holds enormous promise--and looks set to deliver on that promise. Set in a time that could be many years in the future, or perhaps even in the past, in a world that has somehow been lost in time, the people are divided into groups according to how well they perform in The High Examination. If they fail, they are de-classed, if they pass they are promoted and allowed to live in the more attractive spaces of the city of Aramanth. Disloyalty, or indeed any form of behaviour that does not fit into the grand plan of those with the power, is dealt with harshly.

Kestrel and Bowman Hath are twins, and we first meet them on the day their baby sister is about to take her first test. She fails, but the family is disgraced further when Kestrel is labelled as a "wild child" and is sent to Special Teaching--a place from which she may never escape--and her father is banished to the Residential Study Course. But Kestrel has met the Emperor, and he told her the history of the Wind Singer--the monument that overlooks the city but no longer has a voice.

What follows is an intense adventure following the children as they embark on a dangerous journey beneath the city and through the Underlake--a stinking lake of decomposing matter that is bigger than Aramath itself and is inhabited by the real, and sometimes extremely dangerous, underclasses--as they search for the Wind Singer's voice. The journey leads them to the very heart of the evil that has taken control of the city, and with their new friend, Mumpo, in tow, they endeavour to wade through the darkness in their extraordinary search for truth.

The Wind Singer is a truly imaginative, fantastical and distinctive adventure story that grips from the very beginning and absolutely refuses to let go, even at the very end of the book. Cinematic in his approach (the descriptions of the people and places are indeed so large and vivid that you can almost smell them as well as imagine them), William Nicholson taps into the nerve centre of the reader, introducing characters that invoke passion--and compassion--and putting them in situations that are at times so intense that it is almost possible to imagine you are there with them as they wade through the dangerous underbelly of their world in the hunt for light.

As challenging as it is entertaining, The Wind Singer is a book that will surely make its mark on the memory of the reader, and will appeal as much to adults who enjoy fantasy writing as it will to younger readers. Age 11 and over. --Susan Harrison

1. THE WIND SINGER The Wind of Fire Volume I