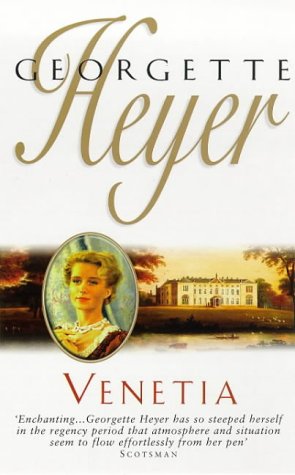 `I allow you all the vices you choose to claim-indeed, I know you for a gamesmaster a shocking rake and a man of sadly unsteady character!' In all her twenty-five years, lovely Venetia Lanyon has never been further than Harrogate, nor enjoyed the attentions of any but her two wearisomely persistent suitors. Then in one extraordinary encounter, she meets a neighbour she only knows by reputation- the infamous Lord Damerel-and before she knows better, is egging on a libertine whose way of life has scandalised the North Riding for years.

British actor Richard Armitage's reading one of Georgette Heyer s best classic regency romances, combined with Naxos technical expertise and most appropriate musical interludes is absolute heaven. Fans of Armitage having recently watched his cool, aloof, calculating Lucas North on the British television series Spooks (MI5 in the US) or his villainous role in Robin Hood and pining for more a romantic Armitage as he was as John Thornton in the BBC production of Gaskell's North and South will find his performance here breathtakingly satisfying, honoring and respecting Heyer's words, characters and setting as he does so perfectly. Armitage's fully-voiced performance is simply amazing and listeners will only regret that he did not read the entire text instead of an abridgment, albeit, an excellent abridgment. From 25-year-old Venetia, through middle aged and dowager women, to the youthful Aubrey, to Venetia's annoying suitors, to Demerel, chameleon Armitage captures them all; and it is difficult to believe that one man is playing all these characters so flawlessly. Occasionally, clearly intended by Heyer's words, some of these women's voices are ridiculous and amusing and Armitage captures that as well. Listeners will smile as some sound, deliberately, almost Monty Pythonesque. Listeners will also agree that Armitage should play Lord Demerel if a film is made. The Naxos package includes a most useful booklet that provides enlightening historical and author background information by Caroline Waight, lists chapter details for each CD, and provides music sources, also available from Naxos in full. Listeners might also want to check out the excellent Naxos audiobooks website for the charming article 'Swooning over Sylvester' about Armitage's recording of Sylvester also by Georgette Heyer (reviewed in SoundCommentary, August, 2009). Venetia deserves 5 stars. Editor's Pick of the Month (May 2010) Truly Outstanding Audio! --Sue Rosenzweig, SoundCommentary.com

Heyer's elegant story of a country girl who falls for a rakish peer of the realm will enchant listeners. Venetia's chance meeting with Damerel turns into a romantic dilemma as she tries to convince him their relationship won't turn her into a social outcast. Richard Armitage's voice aptly conveys the attraction between Venetia and Damerel, making the most of the novel's rich dialogue and clever turns of phrase. Armitage manages to express all of Heyer's opinions about her characters with a subtle sense of the ridiculous. Exchanges between Venetia and Damerel emerge as especially intimate and wonderful. ...the abridgment is gracefully handled... --C.A., AudioFile

A wonderfully witty and entertaining Regency romance by one of the best-known and most beloved historical novelists of all time.