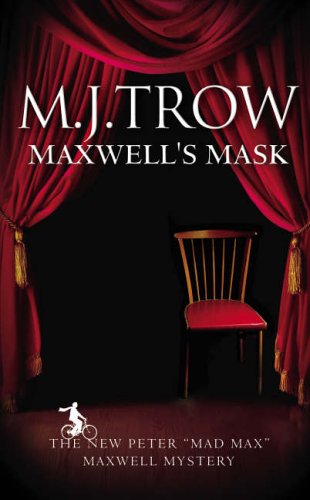 The latest in the popular "Peter 'Mad' Maxwell" series. Deena Harrison was one of Leighford High School's 'characters'. She set fire to the toilet block when she was eleven, and threw Ollie Wendell down the science lab stairs soon after her twelfth birthday. But she had the voice of an angel and could act the skin off a rice pudding, so Mr Diamond, the Headteacher, invoked all sorts of inclusion clauses and EU Equal Opportunities initiatives to keep her on. The autumn she came down from Oxford, there was something of a crisis in the Drama department at Leighford High. Mrs Carmichael was in danger of losing her baby and the Little Shop of Horrors was in danger of closing down. So Deena came back - just to help out. And people started dying. Oh, just tragic accidents of course - loose cables, carelessly placed ladders. Just minor health and safety issues, really. Somebody was killing the cast, and it wasn't Audrey II, the man-eating plant. DCI Henry Hall got to know the Arquebus Theatre quite well that summer. With his favourite DS, Jacquie Carpenter, expecting her own baby, and with murder treading the boards, Hall had his hands full. Especially when Deena's old Head of Sixth Form stumbled into the spotlight. You see, Deena's old Head of Sixth Form had a habit of solving murders...Mad Max is on his bike.

"Trow's skill at spinning mysteries a twist further than expected keeps him at the top of the form' Sunday Telegraph 'A good, hard to solve mystery' Observer"

MJ Trow is a full-time teacher of history who has been doubling as a crime writer for seventeen years. Originally from Rhonda in south Wales he now lives on the Isle of Wight. His interests include collecting militaria, film, the supernatural and true crime. Maxwell's Grave is his 25th crime novel.

Book Description Allison & Busby, 2005. Hardcover. Condition: Good. Ex library copy with usual stamps/stickers Good condition is defined as: a copy that has been read but remains in clean condition. All of the pages are intact and the cover is intact and the spine may show signs of wear. The book may have minor markings which are not specifically mentioned. Most items will be dispatched the same or the next working day. Seller Inventory # wbb0015298988

Book Description Allison & Busby, London, 2005. Hardcover. Condition: Fine. Dust Jacket Condition: Fine. First Edition. This is a Fine Copy of this Book in a Fine Dust-Jacket which has NO chips or tears to the outer edges of the dust-jacket.Not price clipped and this copy has been SIGNED by the Author on the Title Page with charming inscription that reads . '' If You can read this thank a Bookseller M.J. Trow '' Lovely clean bright copy 8vo 304pp First Edition 1st Impression. Signed by Author(s). Seller Inventory # 68649