Items related to House of Thieves 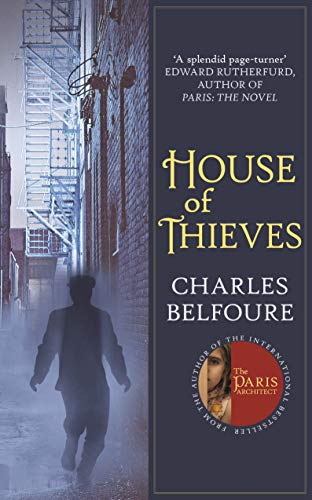 In 1886 New York, a respectable architect shouldn't have any connection to the notorious gang of thieves and killers that rules the underbelly of the city. But when John Cross's son racks up an unfathomable gambling debt to Kent's Gent's, Cross must pay it back himself. All he has to do is use his inside knowledge of high society mansions and museums to craft a robbery even the smartest detectives won't solve. The take better include some cash too: the bigger the payout, the faster this will be over. With a new-found talent for sniffing out vulnerable and lucrative targets, Cross becomes invaluable to the gang. But Cross's entire life has become a balancing act, and it will only take one mistake for it all to come crashing down and for his family to go down too.

'A pulse-raising read for historical crime and historical thriller fans' Library Journal 'A pulse-raising read for historical crime and historical thriller fans' Mara Brandy, Champaign 'A most memorable, evocative read' Publishers Weekly 'With authentic architectural and historical grace notes ... I couldn't put House of Thieves down' Alex Grecian, national bestselling author of The Yard and Harvest Man 'House of Thieves grabs you from the first lines and explosive opening pages, pulling you right into a time and place-just how our favorite historical novels always do' Matthew Pearl, NYT bestselling author of The Dante Club, The Poe Shadow, and The Last Bookaneer 'A splendid page-turner' Edward Rutherfurd, New York Times bestselling author of Paris: The Novel and New York: The Novel 'Beguiling tale of mystery and intrigue' Steve Berry, NYT bestselling author of The Patriot Threat and The Lincoln Myth 'This is historical fiction at its best' Ariel Lawhon, author of the THE WIFE, THE MAID, AND THE MISTRESS 'House of Thieves was great fun... Charles Belfoure continually offers an unusual perspective on the calling of architecture' Becky Milner, Vintage Books (Vancouver, WA) 'Charles Belfoure has brought us another intricate novel full of suspense and daring... With architecture again playing a crucial part in the plot, Belfoure has produced a page turner' Carol Timblin, BookBar (Denver, CO) 'Intriguing from page one' Kathryn Lindberg, Liberty Bay Books (Poulsbo, WA) 'This was a great story that offered insight into the lives of the very wealthy in New York's Gilded Age. The architectural details of the mansions in the city and the beautiful houses in Newport - one even had an interior fire escape slide! - was fascinating reading, as was the glimpse into the underbelly of the time' Laura Cummings, White Birch Books (North Conway, NH) 'This is an excellent historical thriller. The setting is exceptionally authentic and evocative. But the strongest parts of Belfoure's narrative are his characters. Much like his main character in "The Paris Architect," John Cross is skillfully crafted. Every nuance of his personality and psyche is carefully examined as he attempts to combat exploitation. And James T. Kent is a phenomenal villain that is undoubtedly my second favorite character. Old New York society has been cleverly re-imagined by a stellar wordsmith. This is must-read for anyone who loves thrilling mysteries and historical fiction' Romy Griepp, Once Upon a Time (Montrose, CA) 'With a backdrop of the excesses and extravagance of the upper classes (albeit with strict social rules) and the searing poverty of the lower classes, Belfoure leads us on Architect Cross's dizzying descent into a world of crime... I enjoyed this clever romp through the uptown mansions and downtown gambling halls, and the introspection by the main characters as to how new experiences can cause surprising feelings' Janice Shannon, BookTowne (Manasquan, NJ) 'A well-wrought mystery told in such a way to immerse the reader into the lives of the historical elite and slum dwellers of the Gilded Age of New York'- Maggie Carter-de Vries, Books Plus (Fernandina Beach, Florida) --Various

Charles Belfoure is an author and architect who lives in Westminster MD. A graduate of the Pratt Institute and Columbia University, his practice is in historic preservation working as both an architect and historic preservation consultant with a specialty in historic tax credit consulting. He has written architectural histories including being the co-author of The Baltimore Rowhouse and Niernsee & Neilson, Architects of Baltimore, the author of Monuments to Money: The Architecture of American Banks, and Edmund Lind, Anglo-American Architect of Baltimore and the South. He was the recipient of a grant from the James Marston Fitch Charitable Foundation and the Graham Foundation. HIs books have won awards from the Maryland Historical Trust.

Book Description Paperback. Condition: Very Good. The book has been read, but is in excellent condition. Pages are intact and not marred by notes or highlighting. The spine remains undamaged. Seller Inventory # GOR007368769

Book Description Condition: Very Good. Ships from the UK. Former library book; may include library markings. Used book that is in excellent condition. May show signs of wear or have minor defects. Seller Inventory # GRP93632435

Book Description Paperback. Condition: Used; Good. **Simply Brit** Shipped with Premium postal service within 24 hours from the UK with impressive delivery time. We have dispatched from our book depository; items of good condition to over ten million satisfied customers worldwide. We are committed to providing you with reliable and efficient service at all times. Seller Inventory # 2817018