Items related to Bitter field, A (Roads to War) (Road to War)

Bitter field, A (Roads to War) (Road to War) 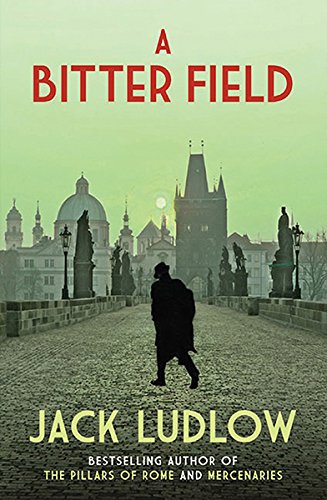 1938. As Hitler sets his sights on the Sudetenland, not everyone in Britain is willing to appease him. Convinced that the Fuehrer's land-hunger is insatiable, the head of the SIS recruits Cal Jardine to help him prove zechoslovakia is threatened with invasion. Before heading undercover to Prague, however, Jardine must first extricate himself from France, where his attempts to smuggle guns to Spain have been held up by a group of fanatical fascists. In their struggle to overthrow the French government, they are prepared to kill for the sake of procuring weapons. Finally arriving in Czechoslovakia, working undercover for the SIS proves no less dangerous. As jealousy and mutual suspicions within Secret Service ranks make it impossible for Jardine to tell friend from foe, he rediscovers old friends of dubious loyalty and makes new enemies of untested ruthlessness.

"Pure adventure with excitement and daring all the way...a devastatingly grim and detailed demonstration of the truth of warfare."--Historical Novels Review

"A vivid, authentic flavour of those turbulent times, laced as it is with carefully worked-in historical detail that's informative without being intrusive"--Historical Novels Review

"Bitter Field is a real page-turner which offers an authentic flavour of those turbulent times."--Joint Forces Journal

Jack Ludlow is the pseudonym of David Donachie, who was born in Edinburgh in 1944. David Donachie has had a variety of jobs, including selling everything from business machines to soap. He has always had an abiding interest in the naval history of the eighteenth and nineteenth centuries.

Book Description Paperback. Condition: Very Good. The book has been read, but is in excellent condition. Pages are intact and not marred by notes or highlighting. The spine remains undamaged. Seller Inventory # GOR004225291

Book Description Allison & Busby, 2012. Condition: Good. This is an ex-library book and may have the usual library/used-book markings inside.This book has soft covers. In good all round condition. Please note the Image in this listing is a stock photo and may not match the covers of the actual item,400grams, ISBN:9780749012410. Seller Inventory # 8500893

Book Description Allison & Busby 24/09/2012, 2012. Condition: Very Good. This book is in very good condition and will be shipped within 24 hours of ordering. The cover may have some limited signs of wear but the pages are clean, intact and the spine remains undamaged. This book has clearly been well maintained and looked after thus far. Money back guarantee if you are not satisfied. See all our books here, order more than 1 book and get discounted shipping. . Seller Inventory # 7719-9780749012410

Book Description Allison & Busby 24/09/2012, 2012. Condition: Good. Will be shipped promptly from UK warehouse. Book is in good condition with no missing pages, no damage or soiling and tight spine. There may be some dog-eared pages showing previous use but overall a great book. Seller Inventory # 9053-9780749012410

Book Description Allison and Busby, 2012. Paperback. Condition: Used; Good. **Simply Brit** Shipped with Premium postal service within 24 hours from the UK with impressive delivery time. We have dispatched from our book depository; items of good condition to over ten million satisfied customers worldwide. We are committed to providing you with reliable and efficient service at all times. Seller Inventory # 1055056

Book Description Allison and Busby, 2012. Paperback. Condition: Used; Good. **SHIPPED FROM UK** We believe you will be completely satisfied with our quick and reliable service. All orders are dispatched as swiftly as possible! Buy with confidence! Aloysius Ihezie. Seller Inventory # mon0002321631