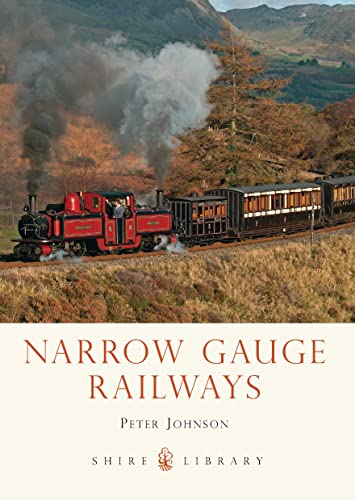 Narrow gauge railways, so well suited to difficult, mountainous terrain, were built in many of the UK's most scenic locations. Their genesis was in mines and quarries where they replaced man- or horse-pulled wagons, but their adaptability meant that by the 1860s they were also carrying passengers, in some cases over quite considerable distances. Today a good proportion of all the important lines survive in the service of tourists, whose appreciation of the landscape, and the railways themselves, keep these relics of industrial Britain alive in all their variety. Peter Johnson has been researching and writing about narrow gauge lines for many years, and this is the perfect introduction to a rich and appealing corner of British railway history.

Narrow Gauge Railways Narrow gauge railways, so well suited to difficult, mountainous terrain, were built in many of the UK's most scenic locations. This title offers an introduction to a corner of British railway history. Full description

This attractive book is about passenger-carrying narrow-gauge railways of at least 2ft gauge which existed before 1951 and which needed an Act of Parliament or Light Railway Order. Fourteen railways are described, five in England, eight in Wales, and the Campbeltown & Machrihanish in Scotland. The narrative is well written, briefly covering crucial aspects in each line's development, restoration where appropriate, locomotives and rolling stock. Pride of place is given to the Festiniog, the earliest line, which gained a reputation for innovations. But it was successful only when it had a monopoly of the slate traffic. Railways which followed were often in debt, although the Southwold was profitable for some years. During the inter-war years all suffered, in some cases terminally, from the Depression and motor competition. Survivors are now dependent on tourists, including three long-dead lines recently given a full or partial rebirth. There is a good choice of photographs, many of them in scenic locations; about half are historic views of the line in operation before the tourist age. As well as an index there is a list of books for further reading and contact details of places to visit. This is an excellent introduction to the subject of narrow-gauge railways. --Alan Brackenbury, Journal of the Railway and Canal Historical Society (July 2014)