Items related to No and Me

Vigan, Delphine De No and Me 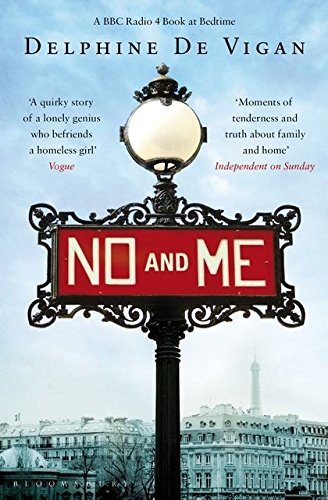 Lou Bertignac has an IQ of 160 and a good friend in class rebel Lucas. At home her father puts a brave face on things but cries in secret in the bathroom, while her mother rarely speaks and hardly ever leaves the house. To escape this desolate world, Lou goes often to Gare d'Austerlitz to see the big emotions in the smiles and tears of arrival and departure., But there she also sees the homeless, meets a girl called No, only a few years older than herself, and decides to make homelessness the topic of her class presentation. Bit by bit, Lou and No become friends until, the project over, No disappears. Heartbroken, Lou asks her parents the unaskable question and her parents say: Yes, No can come to live with them., So Lou goes down into the underworld of Paris's street people to bring her friend up to the light of a home and family life, she thinks.

`Lou's transparent narrative − at times naďve, at times profound − marks this apart as something special'
--The Sunday Telegraph

`A moving and thought-provoking novel for young adults'
--School Librarian

`A very enjoyable book to read as Delphine de Vigan pulls you into the complex, yet addictive narrative' --The School Librarian

`A fulfilling read that gives a great insight not only into the grimy world of homelessness, but also into a family trying to cope with a death of an infant'
--The School Librarian

Delphine de Vigan is the author of several novels, including Jolis Garcons, Soir de decembre and Les heures souterraines. No and Me is her first novel to be published in English; it was a bestseller in France (100,000), where it was awarded the Prix des Libraires (The Booksellers' Prize) in 2008, and also a bestseller in Italy (50,000).George Miller is a regular translator for Le Monde diplomatique's English-language edition. He is also the translator of Conversations with my Gardener by Henri Cueco and Inside Al-Qaeda by Mohammed Sifaoui.